The bible managed to survive sixteen centuries, but the web site didn't last the morning after heavy demand. 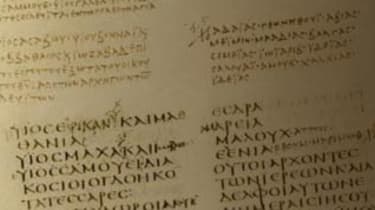 Because of its age and condition, the bible was first published in the fourth century. It took four years and four institutions to gather the web version together and translate it.

Codex Sinaiticus has been launched on the web for the enjoyment of scholars and is made up of 800 pages and fragments - originally it had over 1460 pages. Now, each element of the bible has been converted into a high res image meaning that not only can its text be studied but also its materials. This has already yielded some results, according to those involved.

"The Codex Sinaiticus is one of the world's greatest written treasures," said Dr Scot McKendrick, head of western manuscripts at the British Library. "This 1600-year-old manuscript offers a window into the development of early Christianity and first-hand evidence of how the text of the bible was transmitted from generation to generation."

"The project has uncovered evidence that a fourth scribe along with the three already recognised worked on the text; the availability of the virtual manuscript for study by scholars around the world creates opportunities for collaborative research that would not have been possible just a few years ago," he added.

The British Library, National Library of Russia, St Catherine's Monastery, and the Leipzig University Library launched the website this morning - however, it is already struggling under the strain of users.

"Please note: this website is experiencing exceptional demand. If you are unable to connect to it, please bookmark and return later," said a note on the site.

Although we could access the main site we could not delve much deeper into its pages. Perennial favourites such as Leviticus offered us nothing but a network error, while mankind itself has survived better than the ragged pages of Genesis.

"The transcription includes pages of the Codex which were found in a blocked-off room at the Monastery of St Catherine in 1975, some of which were in poor condition," added Professor David Parker from the University of Birmingham's Department of Theology.

"This is the first time that they have been published. The digital images of the virtual manuscript show the beauty of the original and readers are even able to see the difference in handwriting between the different scribes who copied the text," he said.

"We have even devised a unique alignment system which allows users to link the images with the transcription. This project has made a wonderful book accessible to a global audience."

It's not the British Library's first archiving project - the UK institution has previously put 200 years of newspapers online.