Archos will launch a table netbook computer alongside its media player lineup. 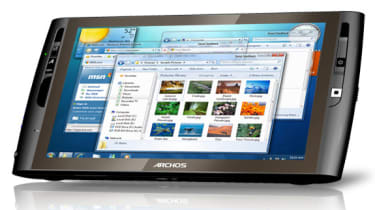 Archos, best known for its media players, has delved deeper into the netbook fray with the launch of its 9PC tablet which it says offers the 'power of a netbook within a tablet', as well as a new netbook.

For the 9PC tablet device, Archos has replaced a conventional physical keyboard with a virtual one, and this is accompanied by an optical trackpoint for both typing and surfing, according to the firm.

Netbook standards, including the Intel ATOM Z515 processor, either a 160 or 80GB hard disk, and Bluetooth are joined by the Windows 7 operating system as well as tablet friendly features such as a TV tuner and antenna.

"What better innovation for a netbook than to get rid of keyboards?" asked the firm on its splash page introducing the device. Supporting its mobility and user-appeal the 9PC has designed to be tactile, is extremely thin (0.63"), and weighs just 800g.

"Intuitive and easy to use, the ARCHOS 9 delivers an unrivalled user experience, and is set to replace the traditional computer," added Archos.

This is not to say that netbooks are far from the Archos agenda, as the firm announced its second miniPC in February of this year - the 10s netbook. Although at that time the firm said that it was expecting to ship the device in April, it has only just been officially launched according to the Archos website.

Pricing information has not been released for either device, and Archos has been unable to respond to calls and emails about further information. However, it has been suggested that the tablet will be made available this autumn and the netbook later this month.

Click here for our roundup of the top 10 netbooks.