This LiteOn DVD wants to protect your data discs with its 'Smart-erase' function. We see if it works and it its worth it. 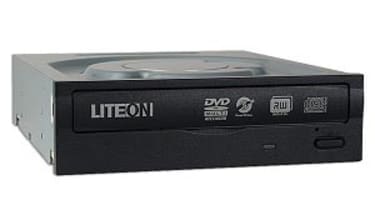 A DVD-R disc was written in just under five minutes and 50 seconds, which is fairly quick but we've seen faster performance from other DVD burners. The iHAS took nearly 19 minutes to fill a DVD-R DL which is quite slow, while it took ten minutes and 44 seconds to write a DVD-RW which isn't especially quick either.

The iHAS has a SATA connection, which the vast majority of PCs made in the past several years are equipped with. A SATA data cable and mounting screws are included in the box. Other extras include Nero Showtime 4 Essentials for watching DVDs and Nero Recode 3 Essentials, which can compress a 8.5GB two layer DVD movie so it can fit onto a 4.7GB single layer disc.

Neither utility is likely to be of much use for most businesses. A more useful software feature would have been the ability to encrypt discs so the contents can only be viewed with a password, but this feature is only available in the full version of Nero which costs around 40 extra.

Overall then, this is a decent DVD burner but the smart-erase function works, but takes a very long time to complete. A better option then is just to pick up a disc shredder, which costs as little as 40 from www.maplin.co.uk and takes only a few seconds.

If you need a replacement DVD writer, then LiteOn's iHAS 324 is worth considering. Some of its write speeds are a little disappointing, but unless you're burning a lot of DVDs, the iHAS, and indeed any modern DVD writer, should be fast enough for your needs. There's no point in buying the iHAS purely for its SmartErase feature though as it takes far too long to erase discs and a shredder will be more effective and take far less time.