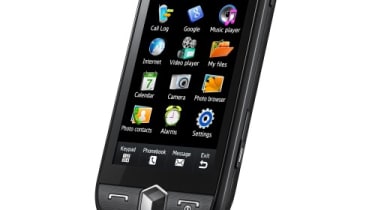 With the Samsung Jet, the Korean company is trying to show us that it's possible to create a very capable phone without using one of the main mobile OS platforms, such as Windows Mobile, Google Android or Symbian OS. Instead the Jet runs a proprietary Samsung OS and sports what it calls the touch Wiz 2.0 user interface (I kid you not).

Indeed with the Jet, Samsung has certainly achieved that, with pretty much every feature available on the phone that you can think of and several you probably would not have. One example includes a Fake Call' feature, that lets at the press of a button will make the phone ring after a preset interval so you can get out of a boring meeting - you can even record a message in advance to make it sound realistic.

Hardware-wise the Jet is indeed housed in a case with a jet black finish, and has a resistive touch-screen that's 3.1in in diameter with a generous resolution of 480 x 800. The feel is lightweight and rather plastic rather than premium and at 99g it won't weigh you down.

The screen use AMOLED technology and it does give an immediate wow factor, with the Vodafone logo that appears as it fires up with the most vivid red I've ever seen on a mobile phone. The blacks are deeper too and this really helps make the most of both pictures and videos. That said I did feel that the 3.1in screen was too small to make the most of it and the screen soon got marked from finger pressing.

At the bottom of the screen you find call and end-call keys and a hexagonal button at the centre for dropping to the home screen and at the top right there's a forward facing camera for video calls.