Toshiba is one of the latest players to throw its hat into the smartphone ring. We take a first look at the new TG01. 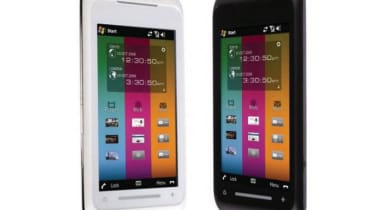 While we're all used to devices from Apple, Palm and HTC, Toshiba is a new entrant to the heady world of smartphones with its TG01 handset.

Could this be the start of some serious competition for the UK's largest mobile network? Judging from the hardware at least, Orange has got a fighting chance. Toshiba's TG01 is certainly something a bit different. The headline-grabbing feature is the use of Qualcomm's SnapDragon QSD8250 processor, a dual-core chip running at an astonishing 1GHz.

When you pick up the phone, the first thing you'll notice is its huge, four-inch display. The TFT screen is also bright and its 800 x 480 resolution means it can pack in a great deal of content in one go.

Despite the size of the screen, there's still plenty of bezel around it, which makes for a phone that will require remarkably large pockets.

The TG01 is also remarkably thin at only a centimetre deep. It's also amazingly light for a phone of its size, weighing in at just 129g. The back comes off to provide access to the removable battery, but during our time with the device, getting the rear cover to snap back on correctly proved quite problematic.

Once inside, next to the SIM slot, you'll also find a microSD card slot. An 8GB card is supplied, but if you like to swap your cards in and out you'll be frustrated as you'll have to remove the battery to do so. And, even then, it's hard to get the card out again.

The svelte nature of the TG01 means it's not surprising that there's no room for a 3.5mm headphone jack. That said, there is a headphone remote that fits into the micro USB slot and you can plug your headphones into that instead.

Fire up the TG01 and you'll find the reason for the 1GHz processor Toshiba has decided to go with Windows Mobile 6.1 as the operating system. This makes it all the more remarkable that there's no stylus attached to the phone - though there is one in the box. The sheer size of the screen helps but even Toshiba's interface tweaks still make it a chore even to set up the time and date on first use.

When you start up you get to choose from two types of interface. There's the standard Orange style with applications available from icons placed in a scrolling sidebar, running down the left hand side of the screen. Alternatively, there's Toshiba's rather strange strip interface, which places applications into groups of three in categories such as Phone, Settings and Applications. You scroll between them using left and right swipes.

When you tilt the phone on its side the entire interface switches to follow, but this plus is overshadowed by the seemingly interminable pause as you wait for it to catch up. Maybe a 2GHz processor is what the TG01 really needs?

Using the TG01 for a brief period, as we did for this first look, it's easy to see that this is a very impressive piece of hardware, hindered only by an OS that isn't up to the task. Watching media on the huge screen is actually immersive due to smoothness and the size, but is it really necessary to have three different media applications to choose from? This typifies the confusing nature of Windows Mobile.

In summary, the TG01 has some very impressive characteristics and the potential to be the best smartphone on the market. But with some quirks immediately apparent we'll have to wait and see whether the Toshiba TG01 can conquer these to fulfil its potential as the business phone of choice.

The TG01 is a remarkable piece of hardware, with a fast processor and huge screen - features that immediately make their presense felt. However, we feel Windows Mobile 6.1 is going to break, rather than make, the chances of this Toshiba smartphone making a real dent in the market.