Asus has been focusing on the design of its products of late and the UX50V is certainly a looker, but does it have the brains to match this beauty? 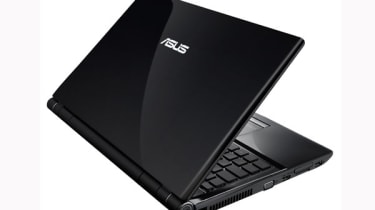 Asus' latest laptop, the UX50V, makes a fantastic first impression. It's one of the best-looking machines we've ever seen from the Taiwanese firm, which has recently begun to place more emphasis on design look at the latest Seashell' Eee PCs, such as the recently reviewed 1005HA, for proof of this image-conscious evolution.

This 15.6in model is clearly a classier affair than the average netbook. The lid and base gently curve together and the whole notebook is covered in a glossy finish that provides a far more regal air than the average Acer or ThinkPad - even if the coating quickly becomes a fingerprint magnet.

The interior of the UZ50V is one of the most minimalist we've seen outside of Apple's MacBooks, with no unnecessary stickers or buttons cluttering up the machine. In fact, there's merely a power button lurking above the keyboard. The scrabble-tile keyboard is backlit and looks attractive in dull grey, and the large trackpad is accompanied by a chrome-effect button.

The UX50V's quality almost matches the stunning looks too. The trackpad is large and responsive, although lacking any of the multi-touch and scrolling features of other machines, and the single rocker button is wide and easy to use.

The keyboard is also decent. While its scrabble-tile design isn't as positive as those included with Sony VAIO laptops we found that the Asus lacked a bit of travel, for instance - it's still perfectly usable for long work sessions.

Predictably, the screen is also more stylish than the average laptop panel. It's an edge-to-edge TFT much like the type that's used on Dell's latest Studio XPS laptops and, as well as looking sleek, offers good quality, with vibrant colours and sharp detail. The native resolution of 1,366 x 768 is, perhaps, on the small side for 15.4in screens the Lenovo ThinkPad X301 has a higher resolution of 1,440 x 900, for instance. We also found that the glossy screen proved slightly distracting under bright office lights.

While the Asus UX50V may look superb from the outside, its specification is less accomplished. The processor is an Intel Core 2 Solo U3500, which has a clock speed of 1.4GHz but, crucially, only one core so there's little chance of the UX50V being an accomplished multi-tasker.

The low voltage CPU didn't excel itself in our benchmarks, scoring a mere 0.5. It's enough to run Office applications, web browsers and other basic applications, but its lack of power and single-core design mean that it will struggle if used as a main laptop and won't deal too well with intensive applications.

Elsewhere, the specification is better. Four gigabytes of DDR2 RAM is plenty, and the 320GB hard disk should be big enough for office documents as well as a decent-sized media collection.

We're also promised that, come its release, the UX50V will be able to alternate between two graphics chips: a bog-standard Intel integrated GPU and a more powerful Nvidia GeForce G105M. While it's not enough to play games, the discrete part should be able to handle Photoshop and other image-editing applications. However, at the moment, it's a moot point as our review sample arrived only with Intel integrated graphics on-board.