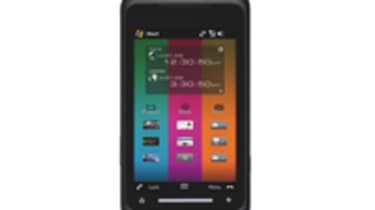 We've been getting excited about the Toshiba TG01 smartphone since we first heard mutterings about its arrival back around the time of Mobile World Congress in February.

Often, with such a build up, expectations reach ridiculous heights and the resultant anti-climax is disappointing to say the least. Much as it pains us to say it, the TG01 falls with a big thud into that category.

Ticking all the boxes

On paper at least, the TG01 has all the markings of a smartphone winner. A massive 4.1in display with 800x480 pixels resolution stares you in the face as soon as you take the handset out of the box.

While smaller screens often make life difficult for business users, there still needs to be a balance. By packing in such a large screen, in addition to a good couple of centimetres of additional casing around it, we think Toshiba has been a bit too generous and possibly at the expense of other features that would have endeared the handset to us more.

The result? A screen that's marvellous for looking at photos or viewing video, web pages and email (more on all of those later) but that makes the phone itself sit somewhere between a portable media player and a UMPC.

Truth is - despite all the talk of one device to rule them all' - most business users would probably prefer a slightly smaller screen and an additional, larger-screened dedicated device if needs be.

While a stylus is provided in the box, there's no in-built home for it in the handset, meaning most users will just use their digits. Inevitably, this makes the screen a bit mucky. Interestingly, the TG01's screen is less finger mark-prone than the majority of touch screeners we've encountered of late, which is a bonus.

The rest of the TG01's design is a classy affair. Save for the small Orange logo at the back, chrome and black are the only two colours you'll find on this handset. It's minimalism works well, down to the matt black of the back casing. Although it's the back casing that proved a key area of irritation.

While it looks nice, once you've managed to take it off which you'll need to do every time you want to put in or remove the microSD card it's an absolute nightmare to get back on. In theory, it's a slide and lock affair. In reality, it's anything but. At the time of publication, we still couldn't line it all up properly, resulting in any ugly, we-made-this-at-home-esque bump to the left of the camera.

Despite its generous screen size, the TG01 is still actually quite thin and light (a centimetre and 129g), but if you've got anything smaller than large hands, this handset will dwarf you and make you feel like a child that's borrowed it from a parent.