Your Views: Returning to the moon

In the week of the 40th anniversary of the first moon landings, we asked in our newsletter if we should be spending money on space in the middle of a recession. 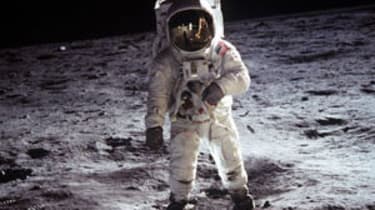 Should we be going back to the moon? It's been 40 years since we were last there and NASA has said that it plans to go back by 2020.

At a gathering yesterday to honour the three original astronauts to mark the anniversary, President Obama praised their inspiration, but made no strong commitment to the future of space exploration - evidently awaiting the result of a upcoming reports that will examine the business case for space'.

From a British perspective, space is both a success and a failure, as we've contributed a great deal but also not reached our potential. We asked our readers in our newsletter what they think.

Brian said: "The space industry is a classic example of an area where the UK has a track record, access and appropriate skills only for the opportunity it represents to be allowed to go begging year after year."

Thus, he said, this is exactly the time to aim high. When else but in a recession should we be looking at a high-value, high-growth industry with a view to strengthening our position?"

Martin, thinks that we need to get back to the big round rock in sky to mine its Helium 3, which could be the basis for nuclear fusion a technology that could solve the world's energy crisis. However, in the years since Apollo 11, he's aggrieved at how it's turned out.

"My abiding memory of the moon landings is that of thinking what could now be achieved by mankind and what wonders the future may hold. 40 years on I can only say that I feel badly let down by the then hype."

However, Mike said that we should take a look at the bigger picture and put the many before the few, or the one. "While it is difficult to reconcile the hardships many are facing in this present recession with talk of mega investment in a return to the moon, our collective achievements as a species are what defines us and, who knows, may one day sustain us all, out there - even on that lump of cheese."

Eddie thinks it's just what we after: "The planet as a whole is in need of a goal to galvanise everyone, to give us all something to shoot for."

"Bring it on," agrees Denise. "It's the only magic in these mad, bad and sad times" - though one would hope this recession will be done by 2020.

Edward meanwhile thinks we don't even have a choice whether we spend on space or not. "Either we take a long-term view and prepare ourselves to colonise other planets or we stay as we are and watch the population grow whilst the resources on Earth run out."

Stuart also isn't thinking of the cash flow though but of species as a whole. As he puts it: "the bottom line is race survival... space is the future of the human race."

Click here to read our feature looking back at the technology used in the Apollo 11 moon landings .