Sony has finally relented and has added a true netbook to its range. Is the Sony VAIO Mini W-Series VPCW11S1E/W now the one to beat? 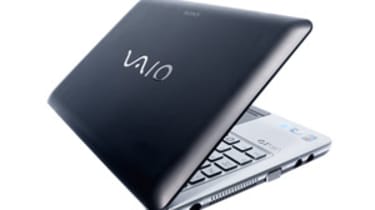 Inside you'll find, as ever, Intel with a N280 Atom processor, taking the strain of Windows XP with a little help from 1GB of RAM. It's standard stuff, so we couldn't help but wonder why the fan needed to be on the whole time, as this could irritate in quieter environments.

In our benchmarks, this helped the Sony achieve 0.43, which isn't bad going for a netbook. It was comfortable with the SD material when we streamed iPlayer content, which looked fine on the screen, but it struggled slightly to handle the larger size content completely smoothly.

Another downside is that there's no way of upgrading the memory, which will put off the more adventurous buyers. Storage is covered by a 160GB hard disk, with SSD still being too costly an option.

The battery, covered in the same silver livery as surrounding the keyboard, is a removable three cell, and in our tests lasted for four hours and 19 minutes, which is not particularly impressive these days a 6-cell battery is said to be on the way.

As with every Sony, some software is included too, such as a DVD player and an Arcsoft programme to accompany the webcam, but you don't buy a netbook for those.

In essence, in its attempt to win the race to the bottom', Sony has attached a very fine screen to an otherwise fairly average netbook. If you want great image quality at the expense of the best keyboard and battery life, the Sony is an option, but for most it will be the other way round.

And considering the Sony is more, not less expensive that its rival, that pretty much puts the VAIO out of the running for an award.

Sony has certainly added its own style here, presenting us with a well built netbook. In particular, the display is a real highlight for its resolution and quality. Unfortunately, other than that, battery life didn't blow us away and the keyboard is poor. If Sony could sort those out, it could have a winner on its hands. But not yet.