Fujitsu ups the ante in the blade server market with its new Dynamic Cube. Is resistance futile? 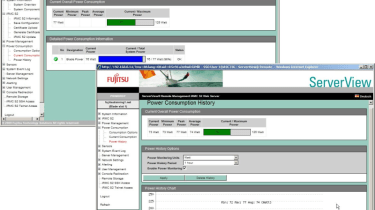 As one of the big four blade server manufacturers, Fujitsu has been in this game right from the start. It was one of the first to launch a product way back in 2002.

Since then, the Primergy BX300 has been superseded by the BX600 and now we have the provocatively named BX900S1 Dynamic Cube, which focuses on high density computing, consolidation and, of course, virtualisation.

The Primergy BX900S1 takes the fight to HP's doorstep as it competes directly with its mighty BladeSystem c7000. However, the BX900S1 takes design to the next level as it offers a number of unique features that the competition will be hard pressed to match.

Standing at 10U, the BX900S1 chassis is the same height as the c7000 but scores better for server capacity as it can accommodate nine full-height or eighteen half-height blades or a mixture of both.

Redundancy is high on the agenda as there is room for up to six 2,800W hot-plug power supplies at the rear and each has a pair of removable dual-fan modules. The chassis shows off Fujitsu's 'Cool-safe' design as any bay that isn't being used is automatically covered by a self-sealing flap.

The cooling design enables air speed to be reduced, which in turn cuts noise levels. During the review we concluded that the BX900S1 was on a par with the c7000 and much quieter than IBM's BladeCenter H, which still uses two stonking great blower fans for the entire 9U chassis. The BX900S1 chassis is also divided into six cooling zones where each power supply looks after the three corresponding half-height bays at the front.

Fujitsu scores well for connection options as the new chassis has eight expansion bays at the rear - double that in the BX600 and the same number as the c7000. Fujitsu has gone further as the BX900S1 has four independent fabrics each with two expansion bays assigned to them.

This offers some interesting stacking possibilities as you can link fabrics horizontally via an internal stacking port or vertically using an external 10GbE CX-4 port on an expansion module. You can also use the latter to physically link up to four chassis together.

A good range of connection modules is already available with Gigabit and 10GbE on the table along with 4Gbps and 8Gbps Brocade fibre blades. The latter have been designed specifically for the BX900S1 but note that some of the Cisco Ethernet modules are essentially the same as those used by HP so only support up to 16 blade slots.