If you want to add another monitor to your desk but have run out of video ports, this DisplayLink powered Samsung could be the answer. 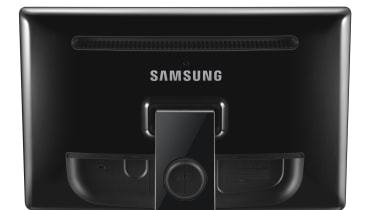 Looks wise, the LD220 is up to Samsung's high aesthetic standards, with a glossy black bezel with rounded edges. The bezel is clear of any ugly buttons, save for an indented power button at the bottom right.

The three on-screen display (OSD) buttons appear when you touch the bezel to left of the power button. The OSD itself appears discreetly at the bottom right rather than bang in the middle, which is welcome although the direct brightness controls do appear right in the centre.

The downside of the glossy finish is that fingerprints quickly build up, which can spoil the look and necessitates a regular wipe down.

When you plug the Samsung in for the first time, you'll need to install the supplied drivers. Out test machine was running the Windows 7 Release Candidate, and we discovered that the Vista drivers supplied would not work at all under Windows 7 the first device we've found where existing Vista drivers were not good enough.

However, we did manage to get it to work to an extent by downloading beta drivers directly from the DisplayLink web site. However, performance was unacceptably poor, with Windows dragging and jerking to the extreme as we moved them across the display.

Instead we rebooted into Windows Vista and installed from there. Initially, we were concerned that the drivers would not work under Vista either as the install routine seemed to restart several times. However, after a rather overlong 15 minute wait it did complete.

Rather pleasingly, this left us with three screens running at once the laptop display, a 22in display connected via VGA and the Samsung via USB. An icon sits in the system tray enabling you to setup your display and choose between extending and mirroring the desktop though essentially this just copies the options available to you in Windows itself.