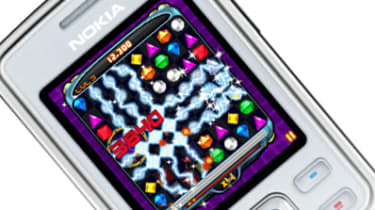 by Popcap for Mobile, BlackBerry, iPhone

Word games are perfect for the commute - they engage your brain in a way that feels productive while still being fun - but since playing Scrabble by yourself isn't nearly as enjoyable as playing with friends, Bookworm takes the linguist's top spot.

Although at heart a word search game, Bookworm diversifies proceedings by adding in a bunch of power-ups and giving you levels to work through. There's an easy-going infinite mode too for when you're just in the mood for a wordie veg-out.

If you're the type that's turned on by word puzzles, games on the go don't come much better than Bookworm. It can become addictive in a dangerously absorbing way though, so don't blame us if you miss your stop.

Glyder by Glu for iPhone

The only game in our list that'll conspicuously tell onlookers that you're playing a game, Glyder demands that you embrace your inner gamer, at least a little bit.

It uses the iPhone's accelerometer, meaning you have to tilt your iPhone to control the game. However, it's worth it just for the pure relaxation factor.

Set in a fantasy world, it sees you gliding about a colourful, ethereal environment as a winged character caught in an inter-dimensional rift. If this sounds all too game-like and geeky, don't worry.

More a contextualised hang-gliding sim than fantasy game, there aren't enemies as such, just pretty environments to swoop around and crystals to collect. The Glyder world unfolds as you collect these, giving it an almost sensual, organic feel.

Meanwhile, the supremely chilled-out piano score is sure to lower your blood pressure - perfect for attaining a zen-like inner peace before attacking the stresses of day-to-day life.

Bubble Bash 2 boasts the strongest retro gaming roots of any game in our list. Based, although not officially, on classic arcade game Bubble Bobble, you have to shoot coloured bubbles up towards a cluster of similar bubbles at the top of the screen. Match enough bubbles of the same colour and they'll disappear. Your aim is simply to get rid of them all.

Requiring faster fingers than most of our picks, Bubble Bash 2 is more like a stress-relieving workout at the gym rather than a lighting of the proverbial scented candle. With levels that only last a few minutes at the most, it's a great quickie gaming companion

The idea of playing a game that makes you work while you're either going to or coming home from your day job may sound ridiculous, but Sally's Spa is a great way to unwind.

You play as Sally, a hard workin' girl, who has set up her own spa - after already having conquered the salon world in the prequel. She's a busy girl. You start with a tiny spa, single-handedly dealing with each customer yourself.

As you start raking in the cash though, you can hire new staff, build new machines and even rent larger premises. Although this may sound a little complicated to be doing all from your phone, you're only ever moving Sally between 'stations' in her salon, making Sally's Spa a strangely rhythmic game. Career progression has never been this pain-free in real life, thats for sure.