TravelMate 8000 Timeline series brings all day battery life, while the Aspire One Pro 531 netbook is aimed at business users. 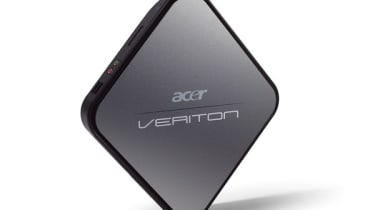 Acer has unveiled new machines for the business and education markets in notebook, netbook and nettop forms.

At the launch press conference, Acer product manger Paul Dutton said the highlight of the new TravelMate 8000 Timeline series was that it was just over one inch thick and that this was down to the use of ultra-low voltage Intel Core 2 Duo processors and space-saving LED backlit displays.

The TravelMate 8000 timelines notebooks will be offered in either 13.3in, 14.1in or 15.6in display sizes, weighing in at 1.6Kg, 1.93Kg and 2.1Kg respectively. The latter model features a full numeric keypad and all have a multi-touch gesture trackpads.

Battery life is a key highlight, with all machines offering eight hours-plus. Watkins said that a range of technologies are used to achieve this, such as the Acer PowerSmart setting.

Features include draft-n wireless, and models with integrated 3G are due in the next couple of months. Security features include a fingerprint reader for fast authentication. Prices will range from 579 to 709.

Acer also unveiled the Aspire One Pro 531 netbook, featuring a 10.1in display, and a claimed 7.5 hour battery life with a 6-cell battery option, which weighs 1.27Kg. Standard netbook features abound, with an Atom N270 or N280, Windows XP and a choice of SSD or regular hard disks.

The Aspire One Pro 531 features a reinforced hinge and and black and silver trim and the company said that the styling and build mark it out as professional product. Depending on the specification, prices range from between 299 and 459.

Finally, there's the Acer Veriton N260G, a diamond-shaped nettop aimed at the educational market. Featuring an Atom N280 processor and an HDMI connector, this is designed to quickly and easily attach to the back of certain Acer displays, for space-saving use in classrooms. As such, Acer is shipping its LANDesk Classroom Manager software and a choice of Windows XP, Windows Vista, or Linux is available.

At the event, Acer general manager Booby Watkins said that trading conditions were tough and that he didn't expect a turnaround until the beginning of next year.

Despite this, Watkins said that Acer was bucking the recession and had grown all its businesses, which includes the Gateway brand, by 60 per cent in the second quarter of 2009.