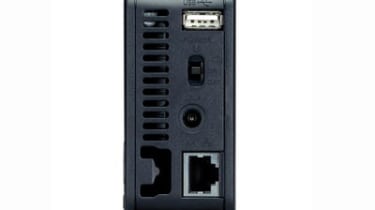 Price and performance aren't the only factors to consider when purchasing IT equipment. Other factors, such as the amount of power consumed by the device, how much noise is generated and the amount of space it takes up can be just as important. These issues are especially important for NAS devices since they're designed to be left running all the time.

Buffalo clearly had these factors in mind when designing the LinkStation Mini SSD. It is small enough to easily slip into a handbag making it one of the smallest NAS devices we've seen, so it'll take up very little space no matter where you place it. It's also the first NAS we've seen to come fitted with solid state disks (SSDs), which tend to consume less power than conventional hard disks.

This LinkStation is actually Buffalo's second attempt at creating a tiny, energy-efficient NAS a previous version of the Mini was fitted with two 500GB hard disks and is still available for around 207 excluding VAT. So is the SSD version worth buying over its hard disk-based predecessor and other NAS devices?

The LinkStation is fitted with two 120GB SSDs, which can be configured as either RAID 0 or RAID 1. The LinkStation is sealed, so it will have to be sent back to Buffalo for service in the event of a disk failure. This is far from ideal if the LinkStation is your business' only NAS. During our tests over several weeks, a SSD did indeed fail - twice - requiring replacement.

We had our doubts about the potential performance boost from having SSDs instead of hard disks fitted in a NAS, since the performance bottleneck is usually its processor or network connection and not its storage disks. Our file transfer tests confirmed our suspicions the SSD Mini copied files at almost exactly the same speeds as its hard disk-based predecessor.

Both large and medium-sized files were copied at an average speed of 12MB/s. This is not very fast compared to other similarly priced NAS devices we've seen, but it's satisfactory for relatively small amounts of data copied intermittently. Small files were copied at an almost unusably slow speed of 2MB/s which is slower than some USB flash drives.

The LinkStation consumed 8W of power when sitting idle and 10W of power when transferring files. This compares very favourably to other NAS devices we've seen some can consume only a few watts more while others can consume nearly three times as much. However, on the downside these power consumption figures are nearly identical to those for the hard disk-based version of the LinkStation.