London gets team of firefighting robots

QinetiQ has demonstrated a team of firefighting robots to help out in Greater London. 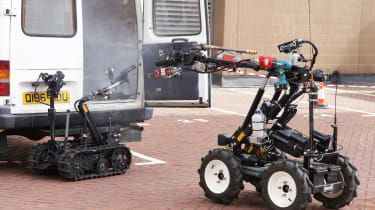 Firefighting robots were unveiled in London yesterday, as they're set to go to officially go to work helping put out blazes around the capital.

Previously used in wars in Iraq and Afghanistan, the QinetiQ robots have been part of a two-year trial in and around London by the London Fire Brigade and transport groups including Transport for London, Network Rail and the Highways Agency.

There are three types of robot. The first, Talon, is small and easy to control, and features video and thermal imaging. It's previously been used in Iraq for bomb disposal. The second is Black Max, which looks like a quad bike and has a video camera as well as a high-pressure water hose. The Brokk 90 is a mini-digger for moving debris and accessing buildings. Click here for photos.

The robots are especially useful if acetylene gas cylinders are nearby, as the canisters can explode even after the fire is out. Because of this, areas around the cylinders must be shut down for a full 24 hours afterward, disrupting transport.

Now, in such cases, the fire brigade can call QinetiQ to deploy the three "remotely operated vehicles" to canvas the area with their cameras. Using thermal imaging, the robots can check if the canisters are likely to explode.

The machines can also cool cylinders, move debris, and access buildings although there's no word yet how they are at getting cats out of trees.

"When fires break out near the railway they are often in circumstances where there is a suspicion that acetylene gas cylinders may be involved," said Simon Christoforato, QinetiQ's business group manager for robotic systems, in a statement. "In recent years there have been an increasing number of rail line-side fires and acetylene incidents across London, each causing massive disruption to passengers."

Chistoforato said that in 2008, the robots were used at 17 fires, cutting the average time transport was disrupted from over 19 hours to fewer than three hours.

The robots are currently only for use in Greater London, but QinetiQ noted additional funding or simply longer call out times could see the robots roll out across the country.

As well, the Highways Agency is looking to use the robots to access cars. "Roads are regularly affected by major incidents so anything we can do to deal with the problems and reduce delays for commuters is a good thing," said Mark Clark, responsible for Incident Management at the Highways Agency.

A researcher has suggested robots could be policing our streets by 2084, but Intel promises robo-butlers in just ten years. Click here for more on the current state of robotics - and whether it's bad news for us people.