Microsoft's EU-appeasing 'browser ballot' will be rolled out to Vista and XP over updates, as well as Windows 7. 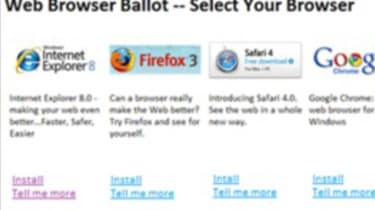 Microsoft's plan to appease EU competition regulators by offering a choice of browsers will include European versions of XP and Vista, as well as Windows 7.

According to Microsoft's submission to the EU, between three and six months after its "browser ballot" proposal has been approved, the screen will be rolled out to Vista and XP users through Windows Update.

The update will be labelled either "high priority" or "important" and those users who choose to install it will be presented with a screen offering them a choice of "up to ten browsers".

This has caused confusion as the initial screen shot of the ballot screen showed only the five most popular browsers, based on market share. However, Microsoft said it is likely to start with these five and offer "further choices" in future iterations.

At the screen, users will be able to install a new browser, stick with Internet Explorer or defer the choice - with Windows offering user-defined reminders.

There will also be links explaining the differences between the browsers, and why users are being offered the choice possibly years after they bought their computer.

Windows 7 owners will be hit with the update on the 22 October, or within two weeks of the EC's decision, depending on which arrives later.

It's also interesting to note that Microsoft will offer the ballot screen for five years from the date the EU approves it. This means we could be seeing it as a feature of Windows 8 also.