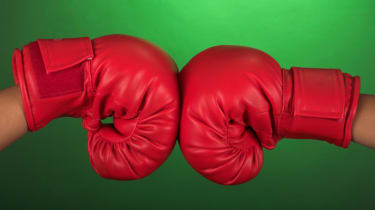 The software giant has also jumped on the app store bandwagon too with its Windows Mobile Marketplace. Windows Mobile 6.5 is around the corner and it promises great things. But it's not here yet. Google has its eye on the mobile market too with its open source flavoured Android OS. Handset manufacturers are releasing Android-powered devices as fast as they can make them and users are clearly enjoying the rival to Apple's App Store in the Android Market. According to Strategy Analytics, global Android smartphone shipments will grow 900 per cent in 2009. Wow.

While Google is a latecomer to this particular party, it has turned up with an innovative OS and app store that users have been hungry for for some time. Microsoft, meanwhile, has brought a me-too marketplace and a pot of yeast extract with it. We know which party we'd rather be at. For current market share and just being in the game longer, Microsoft wins, but for how the future is shaping up, our money's on the new kid in town. Advantage: Google

The big news of the past month was that Google was going to release an operating system called Chrome OS thus confirming the long suspected rumours and setting up the tech world for the biggest rumble in the jungle' since Microsoft took out Netscape.

There's no doubt the Google is still very much the company on the up, while conversely it's no longer controversial to suggest that the writing is on the wall for Microsoft but let's not kid ourselves - it's going to take an long time for great beast of Redmond to start to noticeably stumble.

By recent estimates Windows still has nearly 88 per cent OS market share, and most of the rest of that belongs to Apple. Can Google make an impact in that? After all, its browser has been out for nine months and has less than two per cent market share not that great. But Chrome OS is targeting netbooks specifically, which is a good fit for a web based OS, particularly as this is the only type of computing hardware that has seen any kind of growth in the past year.

Certainly a lean, mean, modern machine powered by Google will have both branding and technical appeal, especially against a now dated looking Windows XP. But come October, and a shiny new Windows 7 will take XP's place.

With Google's name behind it, Chrome OS will have a better chance than other Linux flavours at taking on Microsoft so we predict two tiers of netbooks lower-cost machines running Google, and premium machines running Windows.

We don't see Chrome OS making the jump to desktop and laptops however, and therefore for OSs we think Google is going to play second fiddle to Microsoft for years to come. Advantage: Microsoft

It always did make a lot of sense for Google to produce its own web browser, as the alternative would be to rely on its greatest competitor to be the portal that many of its customers use to get to its services. It finally did so in September last year. It made a strong first impression on the tech community and was widely praised for its speed.

So far though, it's really not had a huge impact on the market, hitting only 1.74 per cent market share in Q2 this year. It's not just unimpressive against the 65.85 per cent share that Internet Explorer still enjoys, it's also poor compared to the 8.46 per cent that Safari achieved in the same period; the lack of a Mac version is surely not doing it any favours. Ironically, it might get some help from Microsoft who bowing to EU pressure, has pledged to offer a selection of browsers when installing Windows 7.

While Chrome is the browser of choice for some geeky types due to its raw speed, the lack of any plug-ins puts off mainstream users and with Firefox making steps to improve its own speed, and even moving to Chrome's look for version 4, there's less need for Google's offering. There's no doubt that Chrome is leaps and bounds ahead of Internet Explorer 8 for speed, but for market share, Google is still small fry. Advantage: Microsoft