Acer churns out another Windows Mobile based smartphone, this time featuring a keyboard. Can it match up in a tough market? 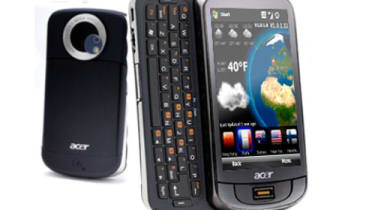 Acer F900 , the M900's twin minus the keyboard, the M900 puts Acer's shell to good use. As we observed with the F900, the Acer Shell is nothing but a casual covering for the austere Windows Mobile 6.1 interface. It includes three different homescreens, each with a different theme and different desktop icons to go with the theme.

The work homescreen for example, includes shortcuts to your calendar, email and missed calls. The media homescreen includes a shortcut to photos and music. The last played track or viewed photo is displayed on the front of the virtual CD player or photo frame.For the security conscious, there's a fingerprint reader in place of a nav key, just below the screen. It's there primarily so you can hide confidential folders, and to give it its due, it's pretty effective at this. You'll have to configure the fingerprint reader first, and when doing this, we found the virtual keyboard kept popping up as we stroked the reader.

The fingerprint reader can also be used for navigation in addition to a jog wheel that's situated on the side. It's not really any good at this though. It doesn't scroll up and down smoothly and you'll often find it selects rather than scroll. It also can't be used horizontally, so for this you'll have to use the touchscreen.

On either side of the fingerprint reader, there's a quick GPS button that takes you to Google Maps, while on the other side is the Windows key that'll take you to back to the homescreen. Outside of these buttons are the call end and answer keys.

Memory seems to be quite an issue with the Acer M900. There's only 128MB onboard, and when we first turned it on, before installing a single programme, there was only 28MB of free space onboard, which is hardly enough to install an alternative browser, let alone productivity applications. Thankfully, there is a microSD card slot, but a card doesn't come included in the box, so you'll have to shell out extra there.

The Acer M900 is just not intuitive enough to be a success. Every control is clunky and that's before you even get to the Windows Mobile 6.1 OS lying below Acer's over-friendly shell.

It's bulky, mischievous and ineffective in almost every element and after decent devices such as the F900 and DX900, it's disappointing to see such a failure from Acer.

We’ve been open-minded with Acer smartphones, but each seems to get worse. The M900 is chunky, unresponsive and bug-ridden, and even its low price can’t save this one.