HTC moves away from touchscreens, with the BlackBerry-style Qwerty keyboard and trackball equipped Snap. Is it onto a winner? 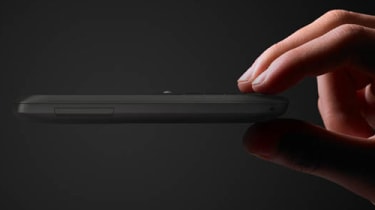 When it comes to HTC phones, touchscreens are very much the norm, but the HTC Snap takes one huge step away from the Taiwanese manufacturer's usual approach.

The first thing you'll notice is that the HTC Snap could easily be misidentified as a BlackBerry smartphone. This is because the Snap features a full Qwerty keyboard below the screen, with a pearl-like trackball directly below the display.

The HTC Snap is a whole lot skinnier than RIM's products though, measuring just 12 mm thick. It's super-light too at just 120g, but that does come at a price.

The camera is only 2-megapixel, the screen is small and low resolution (2.4-inch, 320 x 240 pixels), and that Windows Mobile UI isn't as well hidden as it is on HTC's higher-end devices.

This screen does create issues when browsing the internet. Although Internet Explorer is preinstalled, it's certainly worth installing a third party browser such as Opera, because pages are optimised better for a smaller screen, making it easier for you to view text and full web pages.

However, speed isn't an issue, with HSDPA up to 7.2Mbps (depending on your network), Wi-Fi and EDGE all onboard.

However, there's only 192MB RAM and 256MB ROM, which is much lower than on touchscreen devices such as the HTC Touch Diamond2 or Touch Pro2. There aren't as many power-consuming apps trying to run simultaneously, enabling the Snap to chug along nicely, but if you do decide to install a load of third party apps and have them all running at the same time, you may find the HTC Snap begins to struggle a little.

The internal memory is a problem though. There's only 256MB of space and that's without preloaded software such as Internet Explorer and Pocket Office. We found there to be a paltry 28MB left on the device when we turned it on. Thankfully, there is a microSD card slot and the Snap supports cards up to 16GB.

So what of that keyboard? While it's strange to see an HTC device with one the keys are at least satisfying to use. Each provides a quick response making it simple to type fast. The letters are large so you can be sure you're tapping the correct key, and their domed shape ensures your finger hits the centre of the key.

However, the top row of keys is very strangely organised. The description doesn't match where the keys are. Instead it's in the in the middle of the two buttons so you could press the wrong button quite easily.

The navigation trackball is a key feature on the HTC Snap. It's more responsive than our BlackBerry Bold's, helping you zip around menus and scroll through options with ease. Like on RIM's devices, you can also push the trackball in to select.