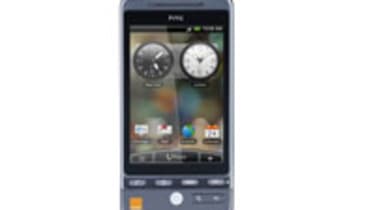 It did take a little while for the phone's engine to get warmed up when we first powered it on, but after that, applications generally loaded quickly. The phone is equipped with a 512MHz Qualcomm processor, as after all if you're a multi-tasking, heavy business user, you need a meaty processor.

That said, unlike many TV meteorologists, the handset seems to know what the weather was like where we were thanks to some smoke and mirrors GPS jiggery pokery. Google Maps was also quickly able to pinpoint our exact location quite speedily.

Hardware aside, the UI is the main attraction. Casting the shininess of Android and all its Market wares aside for one moment, HTC's Hero is the first handset to feature its new Sense UI. The company claims it's based on three tenets: "Make it mine," "Stay close" and "Discover the unexpected."

And it's actually more than a little bit good.

A new kind of interface

Users are greeted with bright and crisp colours and intuitive navigation with context sensitive menus that adapt depending on what application is open at the time. For example, when looking at photos, the menu gives you options of deleting, viewing slide show and so on. Whereas when the browser is in use, menu options are bookmark, back and forward etc.

The search button (identifiable as a magnifying glass on the key) also adapts to whatever application you have open at the time, so you can contextually search through emails, tweets, or something entirely different.

Seven scenes are on offer, each customisable so that users can bring the content that matters most to them to their mobile desktop through the use of widgets. These offer another level of personalisation.

The scenes don't just limit themselves to the screen available at the time. More so, they make use of an extended screen, accessible by flipping across the phone with your finger.

HTC's chief marketing officer John Wang expressed the idea behind this concept during an interview with IT PRO last month. "I hang a painting on the wall, I don't want an icon of a picture on the wall," he said of the extended desktop-creating scenes.