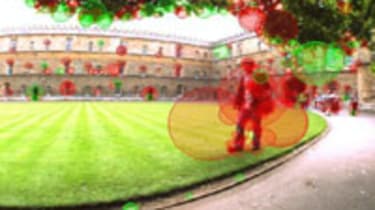 And the world has moved on. Earlier this month, a robot Einstein learned to smile. While a smile may not seem like much, it's a big leap for boffins in this field the world over.

"Some scientists believe strongly that very human-like robots are so inherently creepy that people can never get over it and interact with them normally," said the robot's primary designer David Hanson.

"But these are some of the questions we're trying to address with the Einstein robot. Does software engage people more when you have a robot that's more aware of you? Are human-like robots inherently creepy, and if so is that a barrier, or is it not a barrier?"

Hanson worked on the robotic Einstein with scientists at UC San Diego's California Institute for Telecommunications and Information Technology (Calit2). Their ultimate aim is to get such technological innovations mass produced so that the cost is no longer prohibitive.

"We're trying to get past the novelty of the technology to a certain extent so that people can socially engage with the robots and get lost in that social engagement," Hanson added. "And in a sense, we naturally do that with other humans. If I have a big piece of spinach in my teeth or I have something cosmetically atypical about me, it might be difficult to get past those superficial barriers so that we can have a more meaningful conversation."

"We're also exploring the use of the robot for children with autism. It could be used as a way to teach them facial expression recognition."

The University of Sheffield has also got something special up its sleeve. It's been working with Bristol Robotics Lab to create a robot rat that can search for and find objects using its AI-enhanced whiskers.

"Sensory systems such as rats' whiskers have some particular advantages in this area. In humans, for example, where sensors are at the fingertips, they are more vulnerable to damage and injury than whiskers. Rats have the ability to operate with damaged whiskers and in theory broken whiskers on robots could be easily replaced, without affecting the whole robot and its expensive engineering," said Dr. Tony Pipe, from the Bristol Robotics Lab.

"Future applications for this technology could include using robots underground, under the sea, or in extremely dusty conditions, where vision is often a seriously compromised sensory modality. Here, whisker technology could be used to sense objects and manoeuvre in a difficult environment. In a smoke filled room for example, a robot like this could help with a rescue operation by locating survivors of a fire. This research builds on previous work we have done on whisker sensing."