The N5500 delivers a host of new storage related features, good client support and a vastly improved web interface but it’s the dual-DOM feature that catches the eye. 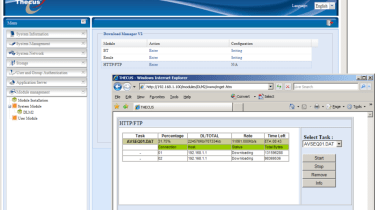 Competition in the desktop NAS appliance market just keeps getting hotter with each vendor trying to outdo the others with an ever increasing features list. Thecus now goes another step beyond the rest as its latest N5500 five-bay appliance introduces the unique dual DOM feature, which targets businesses that want an extra level of fault tolerance.

So what is a dual DOM? In a nutshell, a DOM (Disk on Module) is a chunk of flash memory with an ATA, SATA or USB converter interface, which appears as a small hard disk to the host system. It can run an embedded operating system that's used to boot the system. Thecus has used two 128MB Afaya IDE micro disk modules stacked on top of each other with the lower one plugged directly into the motherboard IDE interface. The idea here is that if one fails the other takes over.

In addition the N5500 supports NAS, DAS and IP SAN operations, supports more RAID types than you can shake a stick at and also introduces Thecus' brand new Ajax based web interface. The latter is a much needed improvement with all features now much more accessible. We've always been distinctly unimpressed with the previous interface as it looks amateurish at best.

The N5500 offers a good general specification with a 1.86GHz Celeron M in the driving seat and partnered by 1GB of DDR2 memory. You get a quintet of USB 2.0 host ports, whilst a single USB 2.0 device port provides the DAS connection. There's an eSATA port for expanding capacity with external drives and a pair of Gigabit ports, which support independent operations plus load balanced and failover teaming.

Installation is a swift process as Thecus' Setup Wizard hunts down the appliance on the network, enabling you to change the admin password and network settings and provides quick access to the main web interface.

A pane to the left provides a tidy tree menu, whilst the main window alongside shows the relevant settings for your selections. You start by creating arrays and can choose from JBODs, mirrors, stripes, RAID-5 or dual-drive redundant RAID-6 and the appliance supports multiple arrays and array migration. We used a triplet of 1TB WD Greenpower SATA drives and a RAID-5 array took nearly five hours to build.