Gateway is back in the business scene and we take a look at a tiny but powerful desktop for the space constrained business. 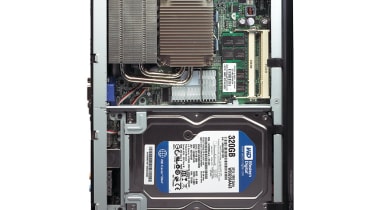 Last month we looked at a laptop from Gateway, but this is the first desktop machine we've seen since the company known for its cow print boxes was revived by Acer earlier this year.

A bright orange strip has been daubed down the front of the unit, presumably to differentiate the system from the rest of its corporate stablemates. While it may not be the usual business style it's certainly distinctive, and the rest of the machine's exterior feels tough enough to withstand knocks or scrapes.

The Gateway may be no bigger than the average nettop, but it's surprisingly versatile inside. The hard disk is housed in a caddy that's screwed into one half of the machine. Although slotting it back into its SATA port can be awkward, replacing the hard disk itself isn't difficult at all. A spare SO-DIMM socket equipped with additional RAM and the LGA-775 processor socket is also easily accessible. Its small heatsink, which boasts two heat-pipes that loop around and extend toward a pair 45mm fans, can be removed with a screwdriver.

Commendably, this tiny PC makes a decent fist of offering as much expansion potential as the Lenovo ThinkCentre M58. The Gateway can't compete with that machine's superbly engineered fold-out chassis, but both systems allow for easy upgrade of core components. The Lenovo, however, allows for the upgrading of the optical drive and its empty PCI Express and PCI sockets, which this Gateway's tiny frame just can't match - the DVD writer is stowed away below the motherboard and can't be reached.

Its decent specification, though, should mean that you won't need to upgrade for a while. The Intel Core 2 Duo E8400 may belong to the last generation but it still provides lashings of power, with its 3GHz core clock speed returning a score of 1.48 in our 2D benchmarks - faster than the 1.3 scored by the Lenovo.