The new Sun Fire X4275 supports the latest Intel Xeon 5500 processors and has storage duties as a high priority but can it match HP for value and features? 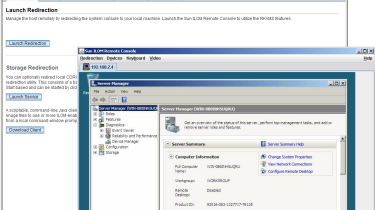 The X4275 doesn't go short in the network department as it has four embedded Gigabit ports. Power redundancy is also on the cards as the server came with both 1050W hot-plug supplies included in the price. With the server hooked up to our inline power meter we found it reasonably easy on the utility supply.

In standby we measured it drawing 14W and with Windows Server 2003 R2 idling along this rose to 180W. With SiSoft Sandra pummelling all 16 logical cores we measured a peak draw of 314W. To put this in perspective, we saw a Dell PowerEdge R710 with a very similar spec pulling 16W in standby, 150W in idle and only 270W under load.

For general remote server administration, the X4275 has Sun's embedded ILOM (integrated lights out management) chip, which presents a dedicated Fast Ethernet port at the rear. Its secure web interface opens with a status report on all critical components and their condition. Tables are provided showing the values for all voltages, temperatures and fan speeds and predefined alert thresholds are applied to each one.

Basic power monitoring features are provided so you can see current power, the permitted maximum load and available power. You also get a power history table but, unlike HP's iLO2 chip and its Power Meter upgrade, you don't get any nice graphs.

Usefully, the ILOM provides full remote control and virtual media services as standard whereas HP and Dell expect you to pay extra for these. The remote control tools proved useful as we needed to load an OS on the review system but the X4275 only has two USB ports and no room for an optical drive at the front. Run locally with a USB optical drive we would have been limited to keyboard input only but the KVM-over-IP service avoided these problems.

Sun can't match HP, IBM or Dell for general systems management tools as its optional xVM Ops Center software suite is only really aimed at managing Sun servers. With HP, for example, you get its Insight Control Edition (ICE) software as standard, which provides the facilities for managing and monitoring a range of network devices including servers.

The X4275 puts forward a strong proposition as a storage server as it has a high potential capacity and plenty of room to expand. Build quality is good, it comes with a solid three-year on-site warranty and power consumption isn't excessive either.

Dell doesn’t really have a direct alternative to the X4275 in its PowerEdge stable so Sun’s competition comes mainly from HP’s DL380 G6 or perhaps its DL180 G6, with the latter looking slightly better value.

Nevertheless, this 2U rack system is a good choice as a storage server as it offers high capacity and plenty of room to expand. The only worry is that Oracle has yet to announce what plans it has for its new server division...