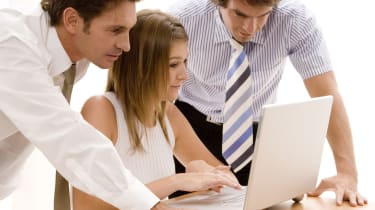 Linux systems are built for networking and have a superior record for overall security. This doesn't mean that Linux is entirely immune, but that the system architecture is much less vulnerable to attack. The cost of virus prevention on Windows systems is immeasurable.

A standard tactic on many networks is to employ a secure Linux box as a firewall, intercepting intruders before they hit the network, and Security Enhanced Linux (SeLinux), developed by the US National Security Administration (NSA), is a component of many Linux systems.

The PC is ubiquitous, and every desktop in every office, of every programmer, secretary, manager or filing clerk has a desktop running an office productivity suite. Each office suite on each desktop comes at a premium, with a word processor, a spreadsheet and a visual presentation tool, crammed with features that are never used, and demands an upgrade every other year to conform with the current data formats.

The content hasn't changed. The functionality hasn't changed. But the upgrade is essential to keep the cycle going. Linux and OpenOffice will run on lower spec PCs and fulfill the functionality required of 95 per cent of Office users. The imperatives for hardware upgrades associated with adopting Windows Vista and the latest edition of Office, for instance, are unknown to Linux users.

Open source removes the need for dependence on single vendor solutions which tend to push up prices.

Open standards for document formats and protocols are a first principle of open source software. Open standards provide a clean intersection between different implementations of software and hardware.

Interoperability, or the simple notion that computer systems should produce outputs in common formats which allow one computer to talk to another, has been a goal of computing since the beginning of the electronic era.

The purpose of open standards is to promote interoperability between different applications on different operating systems. The effect of proprietary data formats is to encourage reliance on single vendor applications and to discourage the implementation of competitive products.