Nokia has announced the Booklet 3G, a netbook that lasts 12 hours between charges. 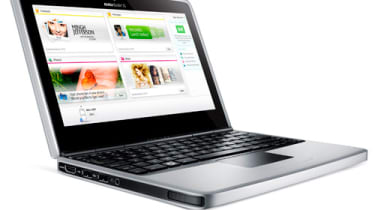 Nokia has launched its very own "mini-laptop", the Booklet 3G, claiming the device will last 12 hours between charges.

It's long been rumoured to be taking such a step, and with netbooks the driving force in PC sales, it's no surprise the mobile giant finally did. That said, despite the specs looking very netbook-like, Nokia has stressed it's a "mini-laptop".

Powered by an Intel Atom processor, the Booklet 3G will run Windows - which fits in nicely with Microsoft and Nokia's recent deal.

If the 12-hour battery life claim proves true, the Nokia device will be at the front of the pack for time between charges. Another intriguing feature the Nokia netbook will boast is integrated A-GPS. Such sat-nav functionality is more frequently seen on smartphones than cheap and cheerful laptops.

The Booklet 3G also offers an HDMI port for high-def video output. It features an aluminium chassis, a material also seen in higher-end laptops such as the Apple MacBook Air, and a 10-inch glass display. The Nokia device weighs in at a not particularly light 1.25 kilograms, and is two centimetres wide.

It also includes 3G/HSPA connectivity, integrated Bluetooth and Wi-Fi - but then you'd expect a mobile firm to get at least connectivity right.

Kai Oistamo, Nokia's executive vice president for devices, said in a statement: "We are in the business of connecting people and the Nokia Booklet 3G is a natural evolution for us."

Nokia has not yet announced pricing or availability of the Booklet 3G will be available, saying instead that finer details will be announced on 2 September.