Delivering a workstation in a mobile form in no easy task, but the Dell Precision M6400 is a near perfect example of how to do it right. 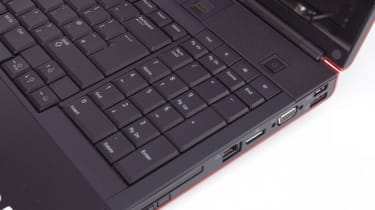 Even if you're fortunate enough to be able and willing to fork out a large sum on a heavyweight laptop, for serious work, the price of the Dell Precision M6400 Covet is likely to make you pause for thought. It does, in fact, cost more than four grand; as much as a second hand hatchback, and considerably dearer than any laptop we've ever reviewed on IT PRO.

So why the high price? Well for a start, the Precision M6400 Covet is a ISV certified laptop. That means it's been through rigorous testing to ensure that it will reliably run expensive CAD and design software such as Maya, Catia, SolidWorks and 3D Studio Max. When you're spending hours rendering complex scenes or high definition videos with lots of effects, the last thing you want is for your computer to fall over halfway through.

Not that you'll be waiting that long, because this is one seriously powerful machine. Under the hood you'll find a 2.53GHz Intel Core 2 Extreme Quad Core QX9300 mobile processor, a whopping 8GB of DDR3 RAM, plus a rapid 7,200rpm 320GB Western Digital hard disk - a recipe that resulted in a mind-boggling score of 1.64 in our application-based benchmarks, the fastest laptop we've ever tested, and significantly faster than the Lenovo W700ds, which scored 1.39 in the same tests.

Of course this isn't a laptop intended for office tasks alone; it's aimed specifically at advanced applications such as professional video editing, 3D design and CAD, and boasts Nvidia's workstation-grade Quadro FX 3700M graphics, with 1GB of its own dedicated RAM. So, to get a handle of that aspect of its performance we also downloaded and ran the SPECViewperf 10 benchmark suite. The results were stunning: in fact our rough and ready calculations put the M6400 ahead of the recent Workstation Specialists WS102LE desktop workstation by more than 50 per cent.

That's a hefty chunk of performance, but it can be faster if you want. The M6400 boasts twin hard disk bays, enabling you to increase performance using a RAID setup (incidentally, you don't have to forsake the optical drive if you do). You can even specify two 256GB SSD drives if you're feeling really flush.