We've had mixed responses to Buffalo's previous NAS efforts. Can its updated TeraStation impress us? 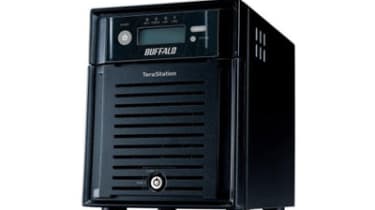 There are four drive bays located behind a lockable door, although it will deter only casual thieves as we were able to prise it open with minimal force even without a key. Four 500GB hard disks are fitted and can be configured as RAID 0, 5 and 10. You can also create two separate RAID 1 arrays if you wish. The disks are mounted in trays and can be easily unscrewed and replaced in the event of a disk failure. The front mounted LCD screen enables you to keep track of useful information such as the current RAID status and IP address.

We were impressed with the TeraStation's performance copying large and medium sized files, although it was very slow transferring tiny files. If you need data redundancy it can be difficult choosing between RAID 5 and 10. RAID 5 gives 1.5TB storage instead of just 1TB as with RAID 10, but the TeraStation is slower at copying both medium and small files when configured as RAID 5 then when it's configured as either RAID 0 or 10. 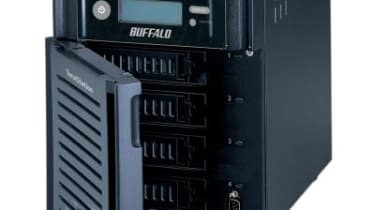 Extra storage can be added by plugging USB hard disks into the two rear USB ports. The TeraStation can also be used to share a USB printer across a network, potentially saving the cost of a dedicated network printer. The rear serial port is used for connecting a UPS so the TeraStation can be set to shut down safely in the event a power failure. The TeraStation can be configured to wake up and go back to sleep again either every day or only on specific days. Up to three different schedules can be set. It's not quite as sophisticated as Netgear's ReadyNAS Duo which can have different settings for every day of the week, but it's still a useful power saving feature to have.