Virgin has jumped on the netbook giveaway bandwagon with its latest packages. But what sort of machine do you get as part of the deal? 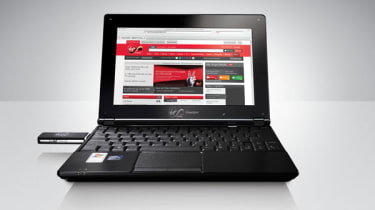 As we previously mentioned, the keyboard feels a little on the cheap side when it comes to the plastic and the keys were a tad sticky, feeling like they were getting wedged down somewhat. The keys are mostly laid out well, bar the right hand shift key, which was just far too small. As a result it was often missed and led to many mistakes when capitalising or punctuating.

The track pad has a rather unusual texture, which although off-putting at times, does stop the finger sticking, which helps keeps cursor movement smooth. The two buttons beneath the trackpad are also long and thin, making them just too small for us to hit comfortably.

The Freedom has two USB ports, sensibly laid out on opposite sides of the keyboard so they won't interfere with each other. Microphone and headphone sockets run along the left-hand side. It also has a memory card slot supporting SD, MMC or MS cards, standard VGA output and a Kingston lock port for that extra bit of security. 10/100 Ethernet is included as its 802.11b/g/n Wi-Fi. The inclusion of n' is impressive for a netbook, but probably a prerequisite for Virgin considering their 50Mb/sec broadband bundle anything less and the wireless wouldn't be able to cope. Bluetooth however is absent.

There are no surprises on the specifications front, powered as it is by a very standard 1.6GHz Intel Atom N270 backed up with 1GB of RAM powered trusty old Windows XP.

There is 160GB of storage from a conventional hard disk. All pretty standard, but entirely usable stuff here, and the benchmark score of 0.39 reflected this. In use with were happy with the speedy power up and shut down times and after installing applications we were speedily back to the desktop.