Roll up, roll up, come and see the fairground attraction of highs and lows that is the past year of telecoms giant BT. Where will the company go from here? 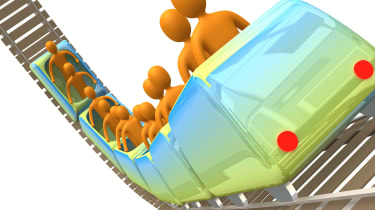 BT has had an interesting year. From groundbreaking and exciting investment to jaw-dropping job cuts and financial losses, it was a technology soap opera for the world to watch unfold.

We look at what BT has faced, both triumphantly and less successfully, where it stands now and what the future holds for this well-known business and household name.

The rise of broadband

BT has staked its claim in one of the hottest areas of the telecoms world: high speed broadband networks.

The company announced last summer that it would be investing 1.5 billion into building a national fibre-optic network with claims it could connect up to ten million homes to high speed broadband in time for the Olympic Games in 2012.

In October, it announced the first pilot sites for the speedy internet connections, one in the North London suburb of Muswell Hill and another in the Welsh town of Whitchurch. It promised initial speeds of up to 40Mbps for 30,000 people in these areas. BT claimed that it could rise to up to 60Mbps in the future.

Work behind the scenes continued as BT announced further sites in March of this year in a mixture of urban and rural locations around Belfast, Cardiff, Edinburgh, Glasgow, London and Greater Manchester.

When July hit, so did the start button on the pilots in Muswell Hill and Whitchurch. But almost as soon as they began, one had to stop. Residents in the North London pilot area complained to Haringey Council about the size of the street side cabinet boxes, suggesting BT had not applied for planning permission.

While that put a spanner into the networks, BT carried on and began their planned rollout in Glasgow to compensate for the hold up down south.

But is this area a success for BT?

Scott Morrison, research vice president of Enterprise Network Services for Gartner, believes BT's broadband moves are not so much a success in technology as successful marketing.

"As a result, it is adept at spinning positives where it can. The level of press coverage it obtained for its plans to roll out VDSL technology under the guise of "fibre to the cabinet" is testament to this capability," he said.

"While the news is certainly good for UK broadband users, it merely starts to close one of the gaps which have opened up on price-performance for UK consumers versus those in other European countries, notably France, where the incumbent France Telecom and three alternative providers are vying to build fibre to the home networks nationally, or Germany, where the incumbent has been deploying VDSL technology for the past two years," he added.

The fall of Global Services

While many divisions of BT seemed to weather the storm of recession with relative ease, there was one department that stuck out like a sore thumb and saw the company descend to the biggest low in this rollercoaster year.

BT Global Services is responsible for delivering IT and communications services to a massive 10,000 companies across the world. It seemed this daunting task was too much, however. In November of last year, following earnings well below expectations the chief executive, Franois Barrault, resigned.

The problems with the division didn't stop when the leader left. Two weeks later, BT announced job cuts of 10,000 due to the financial problems caused by Global Services. The cuts eventually rocketed to 15,000.

All those in the firing line got an extra kick in the teeth when it was revealed later that month that failed leader Barrault received a 1.6 million payoff for his part in the losses.

The most recent results from BT have shown slight improvements but even chief executive Ian Livingstone conceded that when it came to Global Services there was "still much to do," as its figures continued to hold the company back.

So has Global services set up the company for a long term fall?

Mike Newlove, co-founder of Hudson & Yorke, said: "I believe BT needs strong management to succeed, and there is evidence this is already happening. However, BT Global Services has performed very poorly over the last year, predominantly down to a small number of very large and problematic outsource type contracts."

"They have had to make write downs for these contracts and attempt to renegotiate them, and have clearly "bitten off more than they can chew," he added. "The company has failed to deliver, probably focussing too much on revenue growth and gaining market share rather than being commercially robust."

He doesn't believe that this will take the company down.

"The BT Group outside of Global Services seems to continue to perform well in this challenging economic environment," added Newlove. "I think that its investment in the 21st Century Network programme will yield operational cost savings in the coming years."

Other twists and turns

The first twist to talk about is the company's successful move into teleprescence, allowing high standard video conferencing where you feel as if you are in the same meeting room.

Working with Cisco and providing either high end built in equipment for those with cash to splash or offering a half way house of hosting rooms for one time uses, it is clearly a successful piece of tech that could cut out the costs and carbon emissions of travelling for meetings.

But that said, Chris Lewis, group vice president of International Telecoms and Networking for IDC, said that the company is missing out on a trick to make this a real success.

"Ultimately however they have to fit low end systems and take advantage of this future communications platform," he said, "rather than sticking to the high end businesses."

Other news showed that even one of the UK's largest employers couldn't withstand the gravity of the recession, and was forced to put a stop to its well respected graduate scheme, blaming the difficult economic climate for the move.

In a letter to the Financial Times' editor, chairman of BT, Sir Michael Rake, insisted the company would step up the university leavers' recruitment in the future but as students find it harder and harder to get a job during a recession, it was never going to be a widely accepted move.

The next move around the bend

So it was a year of swings and roundabouts for the telecoms giant, but the question still stands: Does the good outweigh the bad and how strong is BT's future prospects?

Lewis is positive for BT's future. "The good thing for BT is that demand is stronger than ever for telecoms. However the premiums from 10 or 15 years ago just don't exist anymore."

"What Livingstone needs to do is make BT a lean mean machine to make it work."

Morrison also took a positive stance, albeit with caution. "Provided the company can complete its cost-cutting measures and do so without adversely disrupting customer service and that's a big ask they should come out of the process stronger than before," he said.

So, all eyes from the telecoms and UK business world rest on BT to see how it will survive future twists and turns. The company obviously still has fans and holds a lot of respect in its name. But it will be interesting to see if this telecoms giant has a gentle Ferris Wheel ride or a terrifying Big Dipper experience as it goes into 2010.