We take a look at the most innovative networks the technology world has to offer. 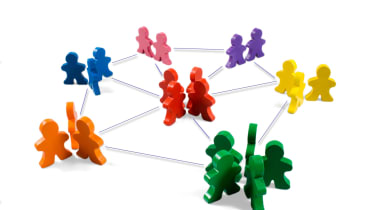 Networks may come across as a dry subject to some but here at IT PRO we have been impressed by the innovative networks popping up around - and indeed beneath - us.

Here's a quick tour through 10 of the more exciting networks we have found, from the sewers to the skies.

Broadband in the sewers

No longer do you need to dig up the roads to provide cities with the broadband both residents and businesses desire, you can now just thread it through the sewers.

The i3 Group has deployed dark fibre networks across - or underneath - a variety of cities so far, including Bournemouth, Sheffield and Dundee, and is now working on plans to connect up Ireland up in this innovative way.

Good Wi-Fi networks are needed both home and away - especially on the field of battle.

To help take some of the pressure off its satellite communications system, the Ministry of Defense has installed a Wi-Fi network with the use of RADWIN links. It connects up all the army bases across Afghanistan, aiding communications in a secure and reliable way.

From the fighting in Afghanistan to the defensive effort at home, it seems networks play a key role.

The British Library may be full of classics, but it recently went modern with the upgrade of its network.

It has an ever increasing amount of digital content, storing 150 million items, including every book or newspaper published in the UK. Using Foundry Networks it linked up its two sites London and Boston Spa to cope with the three million new items added each year.

The biggest sporting event in the world is coming to London and it will need one massive network.

The original contract was given to Nortel, but after the company got into hot water and had to sell off a variety of its assets, Cisco stepped in to take over the role.

It will now be responsible for providing Wide Area Networks (WAN) and wireless Local Area Networks (LAN), as well as call centres and a fixed telephony infrastructure for what the company has claimed will be "the most connected Games ever."

You cannot do a list of impressive networks and ignore the high speed trials of broadband happening across the country right now.

BT has invested 1.5 billion into revamping its infrastructure which is now allowing it to trial 40Mbps broadband in selected sites across the country. So far, trials are happening in Muswell Hill, Whitchurch and Glasgow with many more promised in the near future. The speed could rise to 60Mbps if all goes well.

However, Virgin Media's broadband network is a few steps ahead.

The company has already connected 12 million homes to a network capable of speeds up to 50Mbps, but even more impressive is the current trial taking place in Kent.

A lucky 100 customers in the south east county are getting to trial Virgin's attempt at 200Mbps broadband. Although Virgin has admitted they don't yet see a commercial market for speeds of such magnitude, the technology is a definite positive when looking to the future of broadband networks in the UK.

4G is our future

4G is a network of a different kind, but it's another step towards the future - and not just in the UK, but across Europe.

The European Commission has recently announced an investment of 18 million (15.7 million) into Advanced Long Term Evolution (LTE) technology which could provide Europe with mobile internet speeds of up to 1Gbps. Although 3G trials are already occurring and giving speeds of up to 100Mbps, this investment could see it doubling by 2013.

This may have launched two years ago, but it has inspired a range of further external networks, getting cities high on Wi-Fi.

The City of London Network, provided by The Cloud, launched in 2007 and made 95 per cent of the square mile a hot spot for the rat race to take advantage of. It connects up to 350,000 workers and visitors via 127 nodes hidden within lamp posts and street signs.

The Cloud provide a lot of consumer wireless areas in pubs, shops and cafes but this, along with its network in Canary Wharf, made the leap into connecting up a much larger area.

Networks for the kids

It may not come across as an exciting network, but we think this one deserves a place in the top ten for its educational advancements.

A multi-million pound network has been built in Hertfordshire to link up almost 600 education centres across the county. It means that both students and teachers can easily access online resources such as exam revision or the new British Path Archive, containing hours of news footage, to help with their studies.

It may not be as exciting as Airport security or the big city, but it is projects like this that help bring Britain into the digital age.