Can Motorola's first Google Android-based handset, the DEXT, keep up with the rest of the crowd? 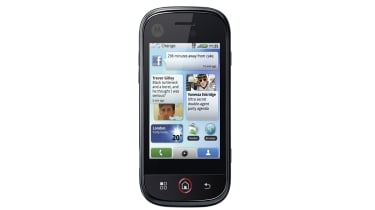 It takes mere minutes. But don't fear. If you lose you phone or someone steals it, it doesn't take very long for you to render it useless to the bad guys with a bit of luck before they've even had a chance to post nasty status updates or embarrass you.

Similarly, the big BLUR server in the sky, will also remember how you had your handset set up and restore those settings to a new handset, according to the Motorola demonstrators on hand last night.

The DEXT also boasts a five megapixel camera with autofocus and video recording at 24fps. The soft, round camera button at the top right of the frame takes a bit of getting used to, but you can always do things the traditional way and use the hard key on the top instead. Although the pictures we took at last night's event were in quite low lighting, the resulting snaps weren't too bad, despite the camera lacking a flash. The lack of a lens cover also niggled.

Once you've taken a snap, it'll appear in thumbnail form at the bottom right of the screen, allowing you to carry on taking more pictures. Simply tap the picture to get it back on the screen in full size and then bin it, share it or set it as wallpaper.

We were at the top of a very tall, grey building so didn't get the chance to fully try out the full HTML browser, but from what we did see it looks pretty good.

The calendar also provides a single view of day job and life commitments, making scheduling much easier. Indeed, work, rest and play are blended together in a tasteful way on DEXT, meaning the idea of having just one device could actually prove to be true in this instance. Although we'll let DEXT sales figures do the talking when they're unveiled.

The handset will be available exclusively (for how long though we don't know) on Orange from next month. It will be free for customers paying around 35 a month willing to sign up to a two-year contract.

There are (as yet unconfirmed) rumours of a second Android device from Motorola too. And if it mirrors the good bits and gets rid of the not so good bits evident in DEXT, it should prove very popular indeed.

It’s a very valiant first attempt from Motorola. MOTOBLUR is innovative and quirky and the rest of the features set DEXT serves up all have their place in modern life.

We prefer our phones a bit less chunky and more pocketable that the form factor on offer with DEXT, but it’s a small niggle in a sea of other positive attributes for this Android first timer and we’re looking forward to getting our teeth into the device properly for a full review very soon.