We put the Toshiba Satellite U500 through its paces to see how it shapes up when compared to the rest of the laptop market. 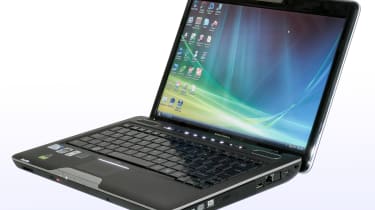 It isn't often that IT PRO sees laptops for home users, but with its unashamedly glossy looks and home entertainment features, the Toshiba Satellite U500 could be a superb travelling companion, particularly for those who like to fill long train or plane rides with the odd film.

There's no attempt to disguise itself as anything other than a full-on entertainment laptop. Even when it's closed, the dark brown, rounded plastic case is good looking, but it's when you open it that you get the feeling the U500 is mostly about having fun. The first hallmark is the incredibly glossy, 13.3in screen. It's an attractive panel when it's turned off, but once it's switched on you can expect reflections to become part of everyday life. It's reasonable when it's displaying white screens such as Microsoft Word, but for images with lots of dark in them, or dark films, you can expect to start sacrificing detail, or moving the U500 around to make sure you're not catching reflections from inconveniently positioned lights.

It has a resolution of 1,280 x 800, which makes it a decent all-rounder, and our image tests suggest that it's a reasonable model as far as colour reproduction is concerned. The ultra-reflective finish does seem to cost it in terms of contrast, however, with dark images a little washed out.

The screen isn't the only thing that's glossy: the keyboard has a shiny finish to it as well. The non-textured finish isn't distracting during fast typing, although typing might be a touch more comfortable if the keys had slightly more travel, and we noticed a tendency to bend in the middle when typing quickly.

Still, the keys are satisfyingly full-sized. Above the keyboard is a row of white LED icons. These are touch sensitive, and allow you to control a media player without resorting to the mouse or keyboard shortcut.

Below the keyboard is a rather small-looking trackpad. In reality, though, it's comfortable to use, and those who find themselves working on the U500 will appreciate the touchpad-activation button, which prevents the cursor jumping around while typing. A handy touch is the light above the trackpad, which lets you know at a glance why the mouse isn't responding. The only significant drawback is that you can't reserve part of the trackpad for vertical scrolling, which is useful for web browsing.

Another useful hardware feature is the wireless switch below the wrist rest, but other than that it's rather lacking. It has three USB ports, one of which doubles as an eSATA port, but it doesn't have a digital output for attaching a display: all you get is a D-SUB port. Nor are there any digital audio outputs, although a memory card reader is nestled next to the wireless switch.

Battery life is reasonable, which is fitting for a laptop designed to keep people entertained on the road. In our light use test, the U500 kept going for three hours 20 minutes, dropping to just under an hour and 10 minutes when put under stress. Neither time is anywhere close to record-breaking, though.

At the U500's heart is a Pentium Dual-Core T2400, running at 2GHz, and backed with a hearty 3GB of RAM. While not a formidable piece of computing rocketry like the Dell Covet, it nonetheless turned in a good overall score of 0.97 in our benchmarks, which suggests it will handle just about any task you can set it to. Storage comes via the luxurious 250GB hard disk enough for a full whack of office applications and a healthy library of videos as well.

The U500's looks divided the IT PRO office. There's no arguing that it looks like a consumer laptop with its rounded corners and dark brown, textured finish it will never be mistaken for a sombre professional ThinkPad. But even as an entertainment machine it hardly challenges the likes of Sony in terms of looks. It does at least keep the weight down at a shade over 2kg it's a decent shoulder bag companion.

Unfortunately, the U500 is missing some components we'd consider core for professionals. There's no TPM chip, for instance. Nor do you get a fingerprint reader.

And, for those heading out on a work trip, three hours' light use battery life might be fine for the journey, but if you need more battery power once you arrive you'll need to find a socket somewhere. The conspicuous lack of a 3G card is another potential problem.

If you're after a reasonably-priced machine that entertains rather than earns its keep, the U500 is a fine choice, particularly considering the power it offers. However, professionals should look at the Acer TravelMate Timeline TM8371. It costs slightly more than the U500, but arguably looks more professional. And, while the Acer doesn't shine in every respect, it offers spectacular battery life around six hours more than the U500.

The U500 offers everything you could want in a sub-700 laptop, but those with work to do should probably look elsewhere.

Good for entertainment, but not so hot on battery life or professional credentials.