Nokia’s Eseries has been on the backburner recently with its Nseries lineup taking charge. Now it’s time for those business devices to make a comeback with the E52. 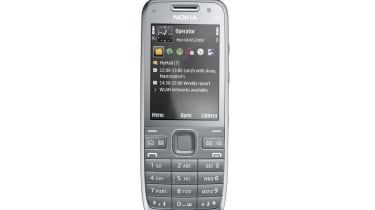 The Nokia E52 is an HSDPA-enabled handset boasting download speeds of up to 10.2Mbps, although this is network dependent. On O2 (which supports 7.2Mbps download), speeds were satisfying enough for browsing simple sites, using the less-than-stunning Nokia browser. We'd recommend installing Opera if you want to surf the net with ease.

Preinstalled apps, as you'd expect from a Symbian S60 device, include QuickOffice for creating Word, Excel and PowerPoint presentations, and a PDF reader. These are best for viewing documents rather than writing them, as it can become a little awkward on the T9 keypad rather than a QWERTY keyboard.

When in personal mode, there are a number of features that have the potential to make you spend more time there than in business mode. First, there's full N-Gage support if you're into gaming. There's also a 3.5mm headphone jack, meaning you can scrap the sub-standard Nokia headset and plug in your own.

Nokia E52 runs on Symbian 9.3 OS with the Series 60 3rd Edition user interface, with a 600 MHz CPU something that should eradicate that time lag. Unfortunately, it doesn't seem to make a whole lot of difference as the OS seems sluggish and clunky, especially when switching homescreens and opening applications.

Battery life is a big bonus. Unlike other smartphones where you'd blink and the battery life would be diminished, the Nokia E52's battery was still full after using it for 24 hours. We may not have made an enormous number of calls, or activated push email, but on other devices in the same situation, battery life would have been squeezed out to at least half life. The 1500 mAh battery was definitely a good choice here.

The E52 is the best-looking, most pocketable Nokia smartphone yet. Although there are a fair number of quirks, these are mostly down to the seemingly antiquated Symbian OS.

A major update is certainly needed soon to keep up with competitors especially when Windows 6.5 begins its roll out next month.

The Nokia E52 is more than competent as a business phone, and it's stylish to boot. It’s just the OS and speed that lets it down.