Web-friendly TVs, smart grids and a device in every hand are but a few of the predictions Intel made at its conference in San Francisco this week. 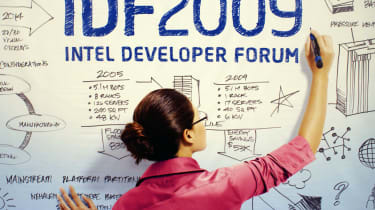 This week, we spent a few days in sunny San Francisco listening to all Intel had to say about its plans for the future at its Intel Developer Forum.

Many predictions were made, and while not all will prove true, Intel prides itself on being predictable.

Here's a selection of crystal ball gazing from the chip giant - click here for all the news from IDF.

Intel has been pushing intelligent TV for a while now, so it came as no surprise that it spent the last day of IDF talking up its latest chip, the CE4100 (formerly known as Sodaville) designed for smartening up set-top boxes, Blu-ray players, TVs and more.

However, it was a bit of a mixed message. Intel kicked off one keynote with a demo of a TV system with social networking, video conferencing and other web 2.0 tools, all based on Adobe Flash.

The trick is that people don't just want another PC. "People do not want to lose that relaxed kick back experience of television, even if you're a geek," he added. "Don't make my TV act like a PC. Putting PC internet directly on a TV doesn't work."

So what will TV of the future look like? It's hard to say how much people want to add the ability to share shows with friends, but advertisers would love to bring the data mining of social networking to the television space. Either way, we should get nicer, more interactive ways of finding what we want to watch from the billion channels on offer as well as the internet.

As president of CBS Marketing George Schweitzer put it, people being able to watch what they want, when they want it may sound good in theory, but "in reality, people are overwhelmed."

Smart grids have long been a target for IT companies. The electrical grid around the world is the "world's largest synchronised machine," said Andrew Chein, vice president of research at Intel Labs.

But that machine is relatively dumb and inflexible. "When we talk about smart grids, we're rally talking about a vision for grid infrastructure that really increases that flexiblity," he explained. "That includes the capability to control and dispatch, route and direct supply, and of course, as we look forward, you fundamentally need to have the capability to add large scale cost effective storage to the grid."

"It won't surprise you to hear me say that of course IT is at the centre of that," he noted.

However, the most effective starting place for smart grids may not be on such a massive scale. Chein said local grids could be the future.

These could be on a city-wide level, or even just a collection of homes. The idea behind it is that local knowledge and management can be more effective than a top-down approach, especially if local power generation is incorporated into the system.

"In many places where there aren't stable electric grids today, this could actually be the route to bring reliable, robust electrical power to those kinds of areas," he suggested.

At IDF, Chein demonstrated a simple system to monitor power use in a house. Using a few simple voltage transducers small, cheap boxes which measure power that communicate a digital signal, a household could accurately watch energy consumption, see which devices are using the most power, and even flick on lights from their own computer.

This one seemed like a bit of no-brainer when it was announced at IDF: app stores for netbooks. Smartphones like the Apple iPhone have thousands of applications to choose from that were designed specifically for those platforms, so why not netbooks? Sure, the cheap and cheerful mini-notebooks run the same hardware as their fully specced cousins, but why not have applications designed specifically for the platform?

Based on the success of the Apple App Store, it's a surprise this hasn't happened sooner. To help it happen for its own Atom platform, Intel is helping manufacturers like Asus, Acer and Dell set up storefronts, while at the same time creating a framework for developers and kicking back 70 per cent of revenue to those developers for their efforts.

All good then. But there's one small thing: Intel itself spent much of the conference going on and on and on about developing once across all platforms. In other words, applications should run on super powerful desktops, web-friendly netbooks and even smartphones.

Chief executive Paul Otellini said: "The goal we have for developers is very simple: write once, run on all devices."

So, then, why do netbooks need their own app stores if they're going to run the same programs as everything else?

Either way, if this brings the same extras to netbooks that smartphones have enjoyed, consumers are sure to jump for joy and start typing in their credit card details.

Moore's Law is Intel's mantra. Executives and researchers from the firm repeatedly say that it still applies, that Intel is sticking to the belief it can keep doubling capacity every couple of years.

It's easy to see how people might think otherwise. How much smaller can the process get? The 32nm process has just kicked into production, with 22nm in testing to arrive for 2011. Intel is already talking about 12nm, if you can believe it. So what's next? 6nm? 3nm? Something's got to give, right?

Not so, according to Intel. We just don't know what's going to happen next, or what new materials or techniques will be uncovered.

The same goes for the performance side, according to Intel's head of mobile platforms Mooly Eden. "The application you run five years from now will not play on today's processor," he claimed, adding that we simply don't know what sort of applications we'll want to use in the future.

"Our competitors say it's not about performance, it's just about graphics," Eden said. "But of course they would say that."

We will all have devices

There are more phones in the world than people. Not all are web friendly, but it's still an amazing statistic. Intel thinks computers are tracing the same path.

"You do not want to share your phone with anybody else," he said, because it's your personal device. Computers are becoming more and more like that.

And price is no longer the issue, Eden claimed. "It's not an issue of affordability. A lot of people can afford it... do they desire to have it?" he said.

How does this apply to emerging markets and the developing world? Intel suggested we'll all be able to afford computers soon, but didn't differentiate between markets. It's hard to believe that people struggling to get fed will find themselves with netbooks, but then that was the very same goal of One Laptop Per Child.

While the pair have fallen out, and Intel's Classmate PC has overtaken the XO has the educational device of choice, it's an admirable goal.

And, to be fair, those devices don't have to be computers. As chips become cheaper and better, even the lowest end handsets could be amazingly powerful, giving access to everyone who wants it. Now that's a future to get behind.