Is Samsung's first foray into Android territory, the Galaxy (i7500) out of this world or just another wannabe? 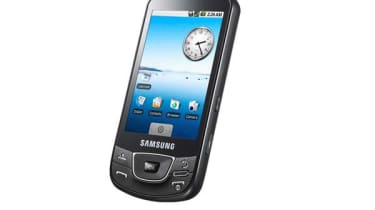 All in all, Samsung hasn't done too badly on the looks front, especially when you compare it to the other Androids out there. Its vital statistics are even more pleasing with the handset showing off a svelte 11.9mm thin figure that's 56mm wide and 115mm long. It weighs in at a very lightweight 116g.

The handset also comes with a protective cover (a bit like a leather sock), which serves to protect it from damage. However, it does render the phone quite unusable with it on, with only a gap for the speaker rather than any of the other controls. This means you have to take it out of the sock each time you want to use it, which means the slippery casing/finger marks situation presents itself again in all its glory.

Onto the interface, Samsung hasn't added any bells or whistles, or widgets for that matter, onto the Android 1.5 (AKA Cupcake) skin, meaning it doesn't really offer anything new to users. It's times like these that the Android Market really comes into its own as business and consumer users alike can download the apps that really matter to them on the base interface.

As an Android handset, the usual suspects are on offer, such as a web kit-based browser, Google Talk, Google Maps, and contacts behave in the same way you'd expect them to.

We had a few issues setting up Gmail on our handset, but it handled the set-up of Hotmail perfectly speedily and also supports other POP3 and IMAP-based email accounts.

We also couldn't get the calendar to launch either, which was a massive shame, particularly as it's said to be capable of supporting more than one.

However, on a more positive note, we found the Switchers button on the home page quite useful for turning on/off connectivity such as Wi-Fi or Bluetooth at a glance. It's certainly much more preferable than digging around in a settings menu.