It's a clash of the titans as the flagship Android handset, the HTC Hero, goes up against Apple's golden child the iPhone 3GS. 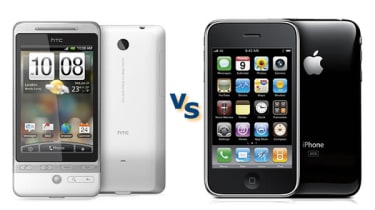 Welcome to the first in our regular series of head to head comparisons where we pit two products against each other, be they mobile phones, operating systems, laptops or something completely different.

This time, it's Apple versus HTC as we stack up the iPhone 3GS and Hero against each other to see which comes out on top.

Apple is renowned for its aesthetically pleasing hardware that screams "Buy me" as people walk past. The iPhone is no exception and is certainly a stunner. When the first generation was launched it served up a big dollop of the wow factor and Apple continued in that ilk with two subsequent generations.

A massive 3.5in (480x320 pixels) capacitive screen dominates the handset, which features minimalist buttons (just one home button in the centre at the bottom, volume adjuster on the left-hand side, next to a mute button and a power button on the top right-hand side).

Prior to the iPhone's arrival, many thought it was only possible to have good-looking devices that lacked brains or boring but brilliant products. Never the twain shall meet it seemed. While the original and second generation iPhones weren't without fault, the iPhone 3GS signalled the arrival of a product with as much inner beauty as its outer skin - which despite its look isn't plastic. Apple hasn't divulged exactly what the back casing is made of, although it did file a patent for a ceramic coating called Zirconia a while back. Mystery solved?

The HTC Hero, on the other hand, is also somewhat of a design leader. It copies the minimalist design showcased in the G1 and HTC Magic. Its 3.2in screen is also capacitive and oleophobic' like the iPhone, the latter meaning it should at least minimise the dreaded finger mark effect that plagues every touch screen handset we've ever encountered. But this magic can only do so much and both handsets are not impervious to grease. The white HTC Hero also has a Telfon-coated rear to help further minimise any smudge marks.