Netbooks: Time to say no?

Something interesting is happening in the consumer notebooks market – and it's something that has implications for the enterprise market too. 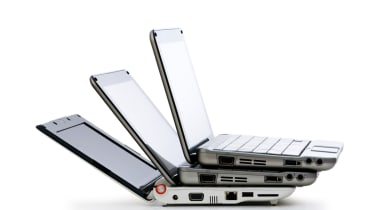 Again, this is ideal for those mobile users who don't need to spend all day creating reports or presentations, but who might want to edit or draft documents and, crucially, stay in the office loop all day.

This could be crucial, because when end users find a technology with tangible benefits, they have a way of persuading their IT departments to adopt them. As an example, Atwal says, "think of the iPhone. A lot of users said 'we want to adopt the iPhone, and we don't care that the IT department wants.' "

As Atwal sees it, IT departments were put in a position where they had to, if not adopt the iPhone, at least support it. Something similar could easily happen with CULV notebooks should users appreciate their style and come to recognise their benefits.

The important thing, Atwal feels, is that IT manufacturers don't start pushing consumer products into the professional market. While notebook manufacturers are doubtless feeling some pressure from Intel to restrict CULV to consumer notebooks, you can guarantee that some major players will break ranks.

HP has already announced a CULV variant of its 13.3in ProBook 5310m, while Toshiba has just released details of a CULV-powered Satellite Pro T130 notebook.

Does all this still sound like a recipe for confusion? Well, it's going to get worse before it gets better. As netbooks grow more powerful and functional look out for Intel's successor to Atom, Pinetrail, in Q4 this year and CULV notebooks become more affordable, it's going to get harder to make clear-cut distinctions, and it's going to be even more difficult to differentiate enterprise class CULV notebooks from future executive ultra-portables.

All we can do, suggests Ranjit Atwal, is accept that segmentation is the way forward. Different types of portable PC will find their own users and "as the market moves forward, these products become just another type or category of PC that will fall or survive on its own."