At its launch, HP referred to its Z800 as a rock star amongst workstations. We take it for spin to see if it deserves to sit centre stage or if it should head back into rehab. 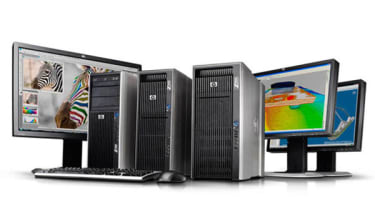 Internally on the motherboard you'll find four x16 PCI Express ports, two x8 and one 32-bit PCI port. Things are motored along by dual Intel Xeon 5560s and these run at 2.8GHz, feature 8MB of cache and runs on a QPI of 6.4GT/s.

These two monster processors are covered by two large fans and unlike your average desktop the memory is too. Then again, the Intel 5520 chipset based motherboard is a heavyweight in every sense, featuring 12 DIMMs slots, which enables it to support an eye watering 192GB of RAM, using mammoth 16GB DIMMs. For more in depth information on the motherboard, check out our sister site Bit-Tech.

As it stands, a mere 24GB is installed using six 4GB 1,333MHz DIMMs. The presence of fans to help keep those DIMMs cool will be appreciated in a machine where stability is even more important that performance. Naturally, there are two fans over the CPUs and a piece of plastic cowling separates then, pushing the airflow from each fan up to the fans over the memory. This hot air is then sucked out by the two fans at the rear of the case.

Also showing how seriously heat issues are taken, there's a large heat sink over the main chipset. HP has said that these system are designed to work under extremes and from looking at the internals we'd be inclined to believe them.

With all these fans, it would be a bit much to expect the machine to be absolutely silent, but that said it is impressively quiet, enabling creative types to get on with their work, without having too much noise intruding.

All cabling is also pleasingly neat with four of the nine SAS ports that run across the bottom of the case occupied and one of the six SATA ports that sit above it. These cables run from the two hard disks installed into our test system, and tellingly these are no ordinary hard disks - instead you'll find a 147GB iSCSI boot drive that spins at 15,000rpm and a 300GB SAS drive for the highest performance.