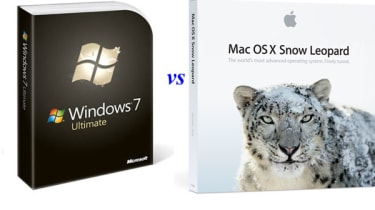 Microsoft probably won't be shouting it to the hills, but the fact is that Windows is based on Windows Vista code - it's still same old Windows under the hood. Windows 7 is, of course, available in 32-bit and 64-bit versions and one of the main thrusts of Snow Leopard is that many of the native applications have been recompiled using 64-bit code. However, 32-bit code is still fully supported on both.

Apple has said that Snow Leopard now deals better than the competition for multi-core CPUs thanks to its Grand Central Station tech, which is designed to take the pain out of coding for multi-core threads. Devs can now code for the OS, rather than create multi-threaded code to start with, which is hard. However, we'll have to wait to see how effective this is, as developers still have to create Grand Central-aware apps.

Microsoft has made much of the fact that it has now baked touch support directly into the OS, and there's little doubt that the launch of the OS will spawn a flurry of touch-related computing platforms. That said, Mac OS has had multi-gesture support for a while, and if you've got a new MacBook Pro you get support for that via the touch-pad.

Delving deeper, while Apple has long offered solid-state drivers in the likes of its MacBook Air, Windows 7 has a step-up on it here with specific support for SSDs, which write data in a very different way to SATA drives.

For media, Apple has introduced Quicktime X, which has a highly minimalist interface that's very effective and a very simple, but also useful, video editing feature built right in. Window Media Player is fine but looks a touch dated now.

We also like the improved information shown in Snow Leopard when you view Wireless networks, but it's also much easier to join a network in Windows 7 than it was in Vista.

Clearly there's some two and fro here so we'll have to make this one a draw.