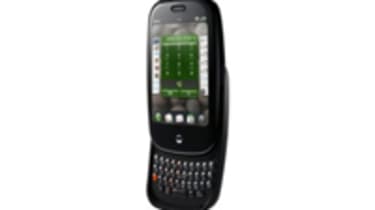 The Pre has admirably discrete keys, with strong contours and a gap between each one, but if your thumbs are on the larger side, it's all too easy to press multiple keys. We suggest heading down to a retail store to get your hands on a Pre if you're prone to problems with smaller devices. There's currently no virtual keyboard option either.

The dinky keyboard is the price paid for one of the Palm Pre's main aspirations to be a thoroughly business-capable smartphone that's still desirable. Let's face it, the Pre is certainly more of a looker than the Palm Treo.

However, in trying to make the Pre appear sleek and svelte, there's been a more genuine misstep made in the phone's design. While it might look like the Pre's front only houses a touchscreen and a single main button, there are actually additional touch-sensitive panels to the left and right of this lone real' button.

Swiping gestures across these panels are used almost constantly in the webOS interface and these lend the Pre its unfortunate learning curve. Your first half an hour with the device is spent wondering precisely how to use it largely because of the unintuitive nature of these touch buttons.

Thankfully, things improve with use and you realise that the webOS interface is in fact painfully simple to use. That said, we still don't like the touch sensitive interface elements much.

The Palm Pre lets you multi-task the hours away, because the phone's home screen is essentially nothing more than a task manager. Apart from this simple home screen, there's just a scrolling, touchscreen-controlled menu where all the phones functions and apps live as little icons in a 3x4 grid.

Just like the iPhone, tap them and they load. Unlike the iPhone, when you hit the main button the Pre exits out to the home screen where the app continues running on some level in snapshot form rather than closing down completely. You can even switch apps from within the apps themselves with a swipe across the touch-sensitive buttons if you activate advanced gesture control one thing we have to doff a cap to the touchpad for as it's quite useful. Closing apps is as simple as flicking them upwards from the home screen, using the response capacitive touch screen.