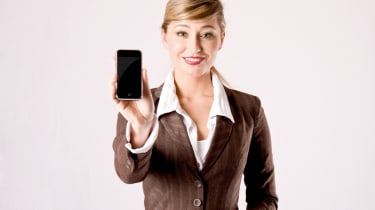 The Apple iPhone has only been in existence since 2007, but in those two years, there have been more sales of the touch screen device than any other phone in the UK and US.

It's not just consumers who are drawn in by the iPhone's good looks, impressive OS and App Store though; business users are buying them like hotcakes and companies are supporting them in their IT departments just as they previously supported BlackBerrys and Windows Mobile phones.

Now, it is Windows Mobile, RIM and the iPhone all battling for third place in mobile phone rankings for 2012, according to Carolina Milanesi, research director of mobile devices at Gartner.

Although Milanesi says that the iPhone still isn't used at the same sort of level as BlackBerry, Symbian and Windows Mobile-based handsets in business, she explained that the iPhone is mainly used by individuals as a personal device but then extends to business.

"We have seen the iPhone enter the business segment mainly as a device acquired by individuals and supported to some extent by IT departments," she said.

"More recently, especially with the security enhancements made via the software and hardware, we see the iPhone being considered by organisations."

But what is it that makes the iPhone a suitable tool for business users?

Apple's OS demonstrates how far operating systems have moved forward. It's only two-and-a-half years old compared to Windows Mobile, BlackBerry and Symbian, and is a welcome fresh face compared to the other aged interfaces. In true Apple style, the iPhone's OS is a design masterpiece.

It was the Apple OS that tempted Yurong Lin, chief executive at Deepnet Security to buy one.

"Actually my previous phone was a Windows Mobile phone and a Blackberry, I converted to the iPhone as it was easier to use and within a couple of taps you could find what you needed and the job was done," Lin said.