We spent a little time with the Sony Vaio X-Series, a laptop its maker claims is the world's thinnest. 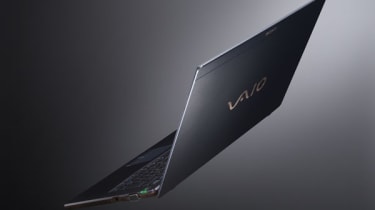 Sony has always made a statement with its machines, and with its new X-Series the statement is "We're back and we're thin."

The computing giant claimed it would never release a notebook. But it's a vendor's prerogative to be able to change its mind. And change its mind it did. The end result? A slightly disappointing W-Series. Fast forward a bit and how times have changed. Sony is back, better but not bigger, serving up the uber slimline X-Series. It's a model that falls firmly into the you want it, but probably can't afford it category'. There are two models in the range and, perhaps unsurprisingly, they will ship with Windows 7. The top of the range features a 2GHz Intel Atom processor, a 256GB SSD and a shiny brushed metal finished lid. If you're prepared to do down to a 1.8GHz Atom, a 128GB SSD and a plain painted lid, you only have to find 1,300 or so for your machine, which is a lot cheaper but still not quite a bargain.

Most of the cost goes into the use of those SSDs. While they have come down in price, they are still expensive compared to conventional discs. You're also paying for the carbon aluminium chassis, which is strong but incredibly light. The X-Series weighs in at 655g with the standard battery, which Sony claims will deliver eight hours with wireless off. If you add the extended battery you could get 16 hours though the weight goes up to 755g, and increases the machine's bulk by just under a third.

As Sony's product manager was keen to point out, despite its Macbook Air-like svelteness (3.9mm), it has two USB ports and an Ethernet socket built in. Mobile broadband is integrated too which we're told will work with any network so you won't need to occupy one of those USB ports when you're out and about.

Amazingly, Sony has found room for a VGA connection on the side. We were informed it chose not to go with DisplayPort as that would require an adaptor for analogue output and it wanted the X-Series to be a take anywhere machine without the need to put anything else to your bag. The 11in display is LED backlit. It didn't blow us away for its quality, but there's nothing wrong with the 1,366 x 768 display resolution, which makes this piece of kit very usable.

We'll find out how well it performs when we get one into our labs, but if you want one regardless, you'll be able to get your hands on it in November.

Click on the gallery above to see pictures of the X-Series.

A fabulous piece of design, and arguably the ultimate is desirability and portability, but wow, it's expensive.