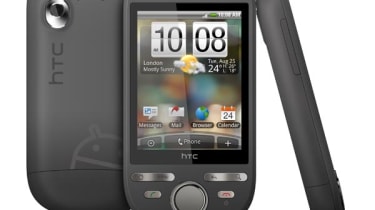 In a move that covers most of the smartphone bases, Vodafone is now shipping three new devices - a high-end Sony Ericsson, another Android-controlled HTC, and a Windows Phone 6.5-powered LG.

The Sony Ericsson Satio was launched back in May at Mobile World Congress, dubbed at the time as the Idou. But it has since had a name change.

The Satio has some serious high-end credentials featuring an expansive 3.5in widescreen touch display and a stupendously specified 12.1 megapixel camera and Xenon flash. The latest iteration of Nokia S60 platform is employed to give it smartphone status.

The target is clearly the iPhone's consumer audience, with a home screen designed to provide easy access to media, while it also sports HTC Hero-style integration with social networking sites.

The HTC Tattoo, featuring a 2.8in display and a 3.2 megapixel camera was announced as heading Vodafone's way last month, extending HTC's and Vodafone's Android-based offerings. Vodafone also said that it would get the LG GM750 exclusively until the end of the year.

The LG GM750 features the recent Windows Phone 6.5 update, though the new OS will be hidden behind LG's S-Class UI, all displayed on a 3in touch screen. A hefty five megapixel camera also stars.

The phones are now all available free on a contract from Vodafone's online stores, the Satio for 35 a month minimum, and the HTC and LG for 25 a month.