The HTC Touch2 is the first Windows Mobile 6.5 (Windows Phone) phone, but does the hardware for this device match up to the updated operating system? 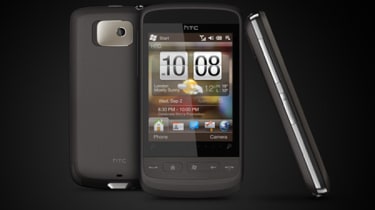 Although a whole collection of Windows Mobile 6.5 phones have been announced, the HTC Touch2 is the first to go on sale, and integrates the TouchFLO 3D interface as seen on previous Windows Mobile 6.1 handsets.

However, many key features of Windows 6.5 are still present, including the lock standby screen that gives you information about any missed call or new text messages. Swipe the lock icon across and you're taken by default to the homescreen that uses Microsoft's sleek looking interface.

Scroll up and down to get snippets of information for each section. For example, highlight email and you can see any new emails, direct from the homescreen, or hover over the music icon to start playing music without having to start up the music player.

You can add more widgets to the homescreen by searching through the directory online too, which is an impressive addition, and one that adds that all-important personalisation element to the handset.

Throughout the whole UI, you'll see tweaks, or rather well deserved modernisation tweaks to the Windows interface. However, you will find the old Windows Mobile 6.1 style in some random places such as the text message inbox that makes the interface feel somewhat unfinished.

If you'd rather user HTC's front-end, you can switch to TouchFLO in the Today settings. Although it's a more graphic alternative, giving you multiple home screens, we're suitably impressed to see it use Microsoft's native UI.

The Touch2 is mainly screen, with only five hardware keys below it. One is the tell-tale Start key that is now a requirement of any Windows phone, accompanied by a back, home, call answer and end button.

Sadly, the touch screen is resistive, like all Windows handsets so far. Although you won't struggle to use it, a capacitive screen would be much preferred, especially as Microsoft is attempting to dispose of its stylus reputation.

Thankfully, a stylus does come slotted in the side of the Touch2, which has to be used for some of the more fiddly operations such as closing apps using the x' or OK' in the top left of the screen and typing on the odd QWERTY keyboard.