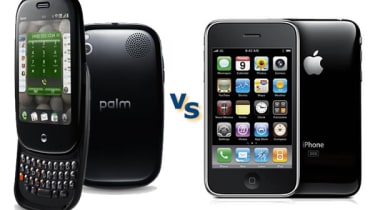 As we said earlier, on first glance it doesn't look like there's much in it between the iPhone 3GS and the Pre so we'll let the stats do the talking.

Both handsets weigh in at a nifty 135g, which is very lightweight when you consider just how much the two devices are packing inside their tiny bodies. We've then got the Pre's 59.5mmx16.95mmx100.5mm (WDH) against the iPhone's 62.1mmx12.3mmx115.5mm (WDH), revealing the fact that the iPhone is slightly taller and slimmer than its marginally more portly counterpart. That said, both are very pocketable and certainly unlikely to cause any questionable trouser pocket bulges, or conversely get buried at the bottom of a bag or briefcase.

While the iPhone has a 3.5in (480x320 pixels resolution) screen, which overshadows the Pre's 3.1in offering of the same resolution, the fact that pixel density is greater means you're not missing out that much.

At three megapixels, give or take, each, the cameras also match up when it comes to raw numbers. But the iPhone does beat the Pre when it comes to storage. The 3GS is available in 16GB and 32GB flavours, while the Pre boasts just 8GB. Neither have microSD card slots for additional storage capacity, which is a shame.

Most business users are fully aware that using Wi-Fi and checking emails frequently and so on is going to drain the battery more than someone who simply sends the odd text and makes a few calls, but the Pre and iPhone 3GS seem to be on a fairly level playing field from the off. Both handsets claim to offer five hours' talk time, but the iPhone has a slight edge when it comes to standby figures with 300 hours to the Pre's 250. That said, at least the Pre's is removable and therefore you could, in theory at least, carry a spare. Although, neither could claim innocence as a battery sucker upper.

The Palm Pre is certainly harder than the iPhone. Quite literally, if the Gizmodo video below of someone using it to slice cheese is anything to go by. But being harder doesn't necessarily give it what it takes to win this particular head-to-head battle.

Palm Pre Cuts the Cheese from Gizmodo on Vimeo.

Winner: Tie. It's too close a call to say which is best when it comes to stacking up the figures against each other.