Where to look to get an IT job

Despite the recession, there are still opportunities out there - you just need to know which sectors and skills to focus on. 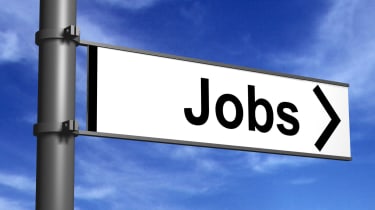 The IT industry hasn't suffered as much as many other sectors since the recession hit, but jobs are still tougher to find than they've been in a long time.

According to stats from e-skills UK, demand for IT and telecoms staff slid 27 per cent over the quarter, cutting 72,000 job openings. The unemployment rate for IT staff also hit a five-year high of 4.8 per cent but still lower than 7.3 per cent across the UK economy.

Indeed, it's not all bad news. IT staff saw their salaries climb one per cent higher than the UK average, with two per cent more receiving a bonus.

Of course, none of those numbers matter to someone who's lost their job and is desperately searching for a new one.

IT is a diverse sector. Some verticals are stronger than others, while some skills are more in demand. Here's what you need to know to find your next job in IT.

If you've been made redundant from a permanent role, your best bet to find a new job may be considering contract work. While demand for full-time workers has slid, contract workers are seeing a relative boom, according to Sean Gallagher, executive member of the Recruitment & Employment Confederation's (REC) technology sector group.

"Overall, there has been a sharp decline in demand for permanent IT workers," Gallagher noted. "Conversely, people still need to do stuff with IT. IT is at the core of any business."

However, the recession has lead to many companies operating a recruitment freeze, as they're nervous about taking on permanent staff. "If you're stuck for a permanent role, look at the contractor market," advised Gallagher.

"Despite headlines, the banking sector, in IT terms, has held up," said Gallagher. "It's mainly because there's a lot of change going on."

He noted that a major financial merger used to happen once a year, while after the crunch hit, four hit in the space of just two months. "That creates a massive demand, especially for IT skills," he said, explaining that IT workers are needed to merge systems and it's not easy work given the high amount of regulation.

Similar opportunities are available in insurance. Jane Binner, associate director of Computer People, said the drive for "peace of mind" is boosting the number of jobs available in the sector.

"At present, the insurance industry seems to have more roles than people for positions - businesses are prioritising legality and peace of mind as areas of importance," she said, adding: "the issue for candidates is often a need for specific industry experience along with skills such as Genius and Lloyds of London market experience."

Another strong sector is the public sector, as the government is "spending a lot of money on IT infrastructure," Gallagher noted.

Big government tech projects like the NHS' National Programme for IT and ID cards require a huge IT workforce.

While those massive decade-long programmes might seem secure, an election could change matters, Gallagher noted. If the Conservatives win and follow through with their threats to cancel controversial projects, it will dent spending in the area.

Another caveat with public sector IT jobs has long been pay, but Gallagher said that things are starting to improve. "It used to be that public sector was the poor relation to the private sector," he said. "I think that's changed. The gap in pay is an awful lot less. It's certainly caught up."

It's no longer just about tech ability, said Gallagher, as more unemployed IT professionals means more are applying for each vacancy. "Clients and organisations are choosier over who they hire," he said.

"There's a huge number of applications now they're kind of upping the spec from purely technical," he said.

However, it's not just about supply and demand. As more firms outsource entry level jobs overseas, UK IT professionals need to offer higher level skills, according to Karen Price, chief executive of e-skills UK.

"Because many entry level IT activities are now sourced from overseas, growth in the UK's IT sector is increasingly focused on high value, highly skilled, multi-disciplinary roles," she said.

"This means there is a growing need for IT professionals with a mixture of technical and business skills, and this demand is expected to continue," Price added.

So don't highlight just your amazing coding skills on your CV, point out your business abilities, too.

Of course, the top workers with the right skills will always find work in their chosen field, but there are some areas with more demand than others at the moment. Price noted that recent e-skills UK research shows a high demand for anyone with SQL, C, C # and .NET abilities.

Computer People's Binner agreed. "At the moment, the demand for .Net in the media sector is increasing as companies are beginning to release development budget again," she said.

But she warned: "These positions can be slightly more tricky to obtain, as often, employers will be looking for candidates with industry experience not just the required qualifications of skills."

The REC's Gallagher noted any large-scale projects are still likely on the go, as their longer time-frames mean they don't halt their march at something so measly as a global recession.

For example, anyone with skills in large scale ERP deployments should still be in demand. As Gallagher noted, a 10 million, global project spanning several years "doesn't just stop because of the recession."

Still, he warned that the good times for those with such skill sets won't necessarily last. "ig box projects, one or two years in duration, still have demand, but there could be a sharp fall in demand looming," if no new ones are started up, Gallagher said. "There could be sort of a trough, a void for bigger projects."

Other skill sets are in demand. Anyone with experience and knowledge connected to remote working should find no trouble getting work, as more and more firms look to offer secure remote access to their staff. Anything from mobile access, secure remote servers, and intranets should still be in demand.

Web 2.0 might be losing popularity as a buzzword, but it's still popular in the corporate world. IT professionals with user experience and web skills such as Ajax, Flash, JavaScript and HTML are also still in demand as businesses turn to customisation and social networking, according to Gallagher. "That's huge and will continue to be huge as the whole industry is going that way," he said.

Gallagher also sees strong demand for mid-market ERP, as well as virtualisation and cloud computing experts. The latter requires higher end changes to infrastructure, so technical architects are likely to be in demand too.