The latest member of the BlackBerry family, the BlackBerry Storm 2, was unveiled today. We got to play with the handset briefly to bring you this first look review. 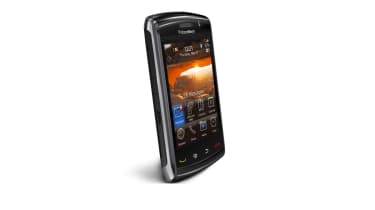 The BlackBerry Storm 2 is a perfect example of why you shouldn't just a book by its cover.

On first glance, it looks uncannily similar to the first generation of BlackBerry's Storm. We'll be the first to admit we were not enamoured by this device and RIM has also admitted that it did have some shortcomings. Not so, its younger sibling.

The latest handset in the BlackBerry family was only announced earlier today. It will be available on Vodafone from 26 October and, from our brief hands-on session with the Storm 2 we're impressed. And not only by the fact it's not the Storm mark one. The Storm 2 has other features of note too.

It's easy to get carried away with criticism about the first generation of the Storm, but it was one of the company's most popular devices, serving up something a little bit different as it did. Thankfully, the Storm 2 builds on the good things about the first member of the family and learns lessons from the things that had people frowning.

First off, the large (3.25in), crisp display is there in its 360x480 pixels resolution glory. Some may be unappreciative of the numbers on offer here, but it serves up home screens, images and videos in all fine detail, with blacker blacks and so on. But there's no longer a silly gap around the screen that allows bits of dust, skin and other grime to get trapped there. Instead, the finish is cleaner and the phone's main control buttons are fixed onto the screen rather than below.

Screen it all before?

The Storm's screen also moved up and down, like a see-saw, when you typed or pressed anything. This generally meant that you had to wait for the upswing before pressing again. This made for a speed texter/emailer's worst nightmare.