Search giant Google is spreading the word about how many companies are now benefiting from its technology. 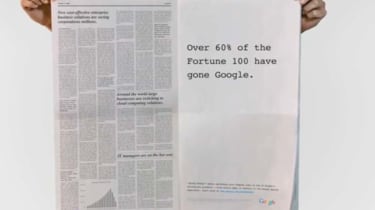 Google has unveiled a new advertising push to highlight the growing number of businesses embracing its services.

The new 'Gone Google' campaign will go live in the UK, in addition to Australia, Canada, France, Japan and Singapore. Its aim is to promote the fact that Google Apps is now used by more than two million businesses around the world.

The most recent addition to the Google user family is Rentokil Initial. Just last week the company announced it had embarked on the largest ever deployment of the the search giant's hosted, cloud-based system, which will involve an eventual roll-out to some 35,000 users.

"Since we first asked for your 'gone Google' stories in August, we've seen thousands of tweets and hundreds of comments explaining how and why your company decided to go Google with Apps, as well as with other Google enterprise products such as Google Postini Services and the Google Search Appliance," Google Enterprise Team members Tom Oliveri and Vivian Leung, said in a blog post.

"Today, we're excited to support this global momentum with the expansion of the 'Gone Google' initiative to additional countries... We hope our messages in train stations such as Paddington, La Dfense and Shinagawa, and at airports in Singapore, Toronto, Dallas and beyond help companies, schools and organisations learn all about the benefits of going Google with our enterprise products."

The video below shows a taste of what the new campaign will involve.