The BlackBerry Bold 9700 shrinks down the 9000 to fit in your pocket. We take see if smaller is better in this first look review. 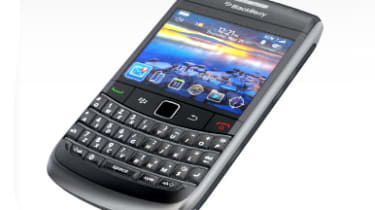 If you're after a serious emailing phone, up until now the BlackBerry Bold 9000 has offered one of the best options around, thanks to its generously-sized QWERTY keyboard.

The BlackBerry Bold 9700 updates the design, bringing it a little more in-line with its less business-oriented rivals.

It's got a sleeker, smaller body and a slightly reduced QWERTY keyboard. However, the keys use the same contoured design as the Bold 9000, so they have largely the same feel when typing.

This size reduction comes with a few other notable ramifications.

Firstly, the handset feels significantly denser than the Bold 9000. This may sound like a criticism, but it's not. It's much more testament to the compact form of the device. Where the original Bold felt as though there was some spare room behind its back plate, which there was, the 9700's internals have been packed-in more tightly.

The end result is a phone that'll sit more happily in your pocket, although some will undoubtedly prefer the Bold 9000's chunkier dimensions.

The screen's inches are also chopped down slightly in the Bold 9700. Although the difference is perceptible, it's not dramatic. From 2.6in, the new Bold drops down to 2.44in.

Surprisingly, the resolution has actually gone up to 480x360 pixels. This means an increased pixel density, which in turn makes images and text appear sharper.

The screen looked great throughout our time with it, performing well with text and more challenging video content. Although BlackBerrys are not traditionally thought of as devices to watch video on, we wouldn't rule out watching a TV episode on the Bold 9700 on the way to work.

Another departure in the 9700 is in the central navigation button. Rather than using the traditional BlackBerry trackball, the Bold 9700 uses a touch-sensitive track pad.

This square pad can also be pushed down to act like a standard select button, while light swipes across it are used to navigate between the phone's menus. It's the same as seen in the recent 8520, and we found that it functions commendably well.

In fact, even if you're a trackball devotee, you should be able to adapt before too long.